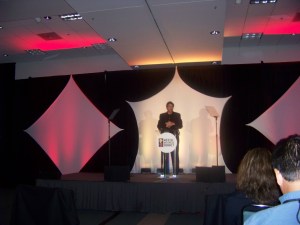 There are so many posts going up about who loved or hated E3 that the discussion over the show format is overshadowing coverage of the video games previewed in Los Angeles last week. The elegies for E3 are flowing throughout the Internet.

Industry agent Keith Boesky said people told him that the empty hallways were “post apocalyptic.” A telling moment for me: Tom Russo, former G4TV programming head, waved at me from a few hundred yards away, in the empty corridor, and yelled, “Dean, can you see me in the crowd?” John Riccitiello, CEO of Electronic Arts, told the San Francisco Chronicle that “I hate E3 like this,” while Laurent De Toc, a Ubisoft executive, piled on, saying the show was more like a convention for pipe-fitters.

Even Michael Pachter, an analyst at Wedbush Morgan, interrupted his discussion of game industry stocks for his own mini-tirade. He wrote, “The show was small in scope, and the spectacle of E3 is dead. The Los Angeles Convention Center concourse was as quiet as a college library during summer, with little to attract media attention.  The main game display area was similar in size to a school cafeteria (as compared to filling the entire convention center), and the ‘fireworks effect’ of past shows was reserved for the evening parties.” 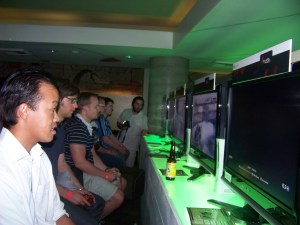 Everybody has an opinion on how to fix it. To recap, E3 drew more than 80,000 attendees in 2006, but big companies complained the costs were skyrocketing and the May show was causing them to pull engineers off their games just to spruce up their E3 demos. To show that it was industry’s best friend, Sony staged huge parties with thousands of guests on a hilltop near Dodger Stadium. The Entertainment Software Association, which sponsors the show, shifted the 2007 show to Santa Monica and carved back attendance to 5,000, mostly journalists. This year, the show stayed at 5,000 but was held in the cavernous Los Angeles Convention Center.

“The irony is that we have a cultural revolution, with more people enjoying interactive entertainment than at any other time in our history; the video game industry has never been better,” said Joseph Olin, president of the Academy of Interactive Arts and Sciences. “And you would think that we are going out of business here. We’ve lost the opportunity to stand up on our soap boxes and shout, look at me. The one thing the traditional E3 did was light the place up like a roman candle lit at both ends and focus the world’s media attention on us.” 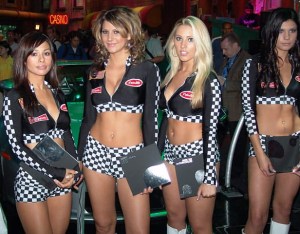 Mike Gallagher, head of the ESA, told me before the show that the invitation-only event was centralized and designed to be very efficient for key opinion makers. But I’m fairly certain he was disappointed that fewer than 100 attendees showed up for his own keynote speech and less than 50 showed up for Texas Gov. Rick Perry’s speech. (I suggested they offer journalists free food if they attend, though I myself was perfectly happy to attend without that enticement).

Gallagher told the San Francisco Chronicle that the association would likely increase the numbers at next year’s show. Holly Rockwood, spokeswoman for EA, said many members of the ESA believe that the show can be improved next year by adding a consumer element. 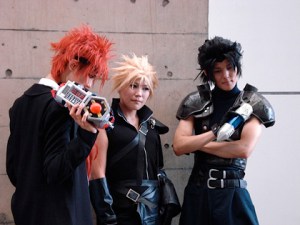 The Tokyo Game Show should serve as a model, said Hal Halpin, president of the Entertainment Consumers Association. That show, which will be held Oct. 9 to 12 this year, allows press exclusive access for a day and then opens the doors to the general public. The latter usually dress up and provide the celebratory extravaganza (i.e. booth babes) that attracts the broadcast press — something that was in short supply at E3 this year. Halpin says they should combine E for All, a show for gamers in October, with E3.

David Perry, chief creative officer for Acclaim, said that the show was an embarrassment and the industry should open it up to every game developer and publisher in the world in acknowledgment of the industry’s global reach.

But will there be an E3 next year? Dennis McCauley, editor of the Game Politics blog, predicts that the industry will let the show die.

Pachter wrote that the show is headed for extinction, unless the industry wakes up. Organizers could, for instance, move the show earlier so it doesn’t occur during the “quiet period” for companies reporting their quarterly results.

I have to say that I benefited from the new format. There was less competition from the big-name media outlets for key interviews and networking was more efficient. I didn’t miss a single one-on-one interview, whereas I always missed appointments in the past because it was so hard to navigate the crowds.

I heard similar notions from freelance game journalist Peter Suciu (his post), Dan Amrich, senior editor of the Official Xbox Magazine, Chris Baker of Wired, Rob Smith of the Official PlayStation Magazine, and Mike Snider, a longtime video game writer for USA Today. And those of us who made it into the Rock Band 2 party were thrilled to watch The Who put on a nostalgic concert. But there were a lot of people, game industry CEOs included, whom I normally meet with but were not invited to attend. They couldn’t get in.

“I do sort of feel a tinge of regret that E3 was so scaled down,” Baker wrote in an email. “The old E3 was sort of like the ultimate video game. It had great visuals and audio, what with those three story demo booths and 50 foot video screens. You were navigating through this enormous environment, checking your map and dodging obstacles, trying to choose the best routes and evade dull appointments and maximize your time with games while minimizing your time in transit. Part of me misses the old E3 because it was like a really difficult game, and I’d leveled up to the point where I was kind of good at it. And now those skills are useless.” 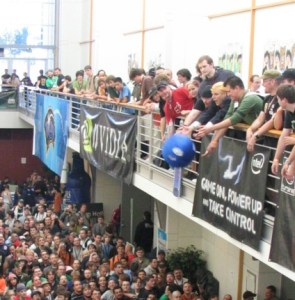 If E3 goes away, there will hardly be any lack of game shows. There is the Games Convention in Leipzig, Germany. This week is Casual Connect in Seattle and Comic Con is in San Diego. The Penny Arcade Expo is in Seattle on Aug. 29-31. Nvidia’s new show, Nvision 08, is Aug. 25-27 in San Jose, Calif. And the Game Developers Conference is in San Francisco each spring.

My own thought? They should combine an invitation-only event for journalists and top executives with a paid-event for game industry followers and the general public. That should help pay for the ESA’s own costs so that it doesn’t have to charge its members such high dues (which caused Activision Blizzard, the industry’s biggest company, to drop out of the ESA). A little bit of spectacle will bring the big media back and allow the video game industry to enjoy its own moment on the pedestal. E3 is as much a statement about the clout and the power of the video game industry as it is show for hacks to see games.