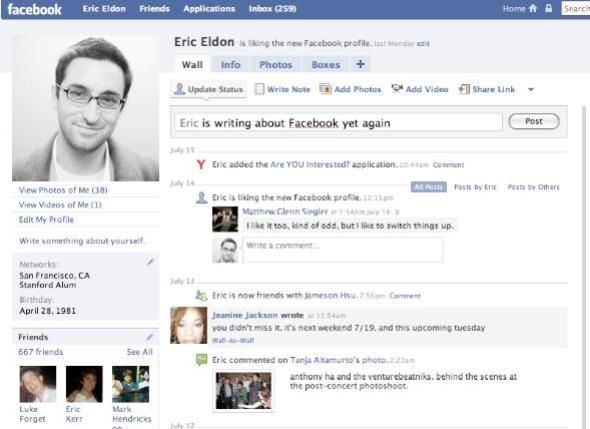 Facebook has finally started integrating its new redesign into its main site. The company is betting that what users want to do is publish more information about themselves, and see more about their friends activities. The thing is, do most Facebook users actually want to do those things?

There’s a large school of thought in the Facebook application developer community that believes the majority of Facebook users actually like to do what most MySpace users also do — express themselves. And by that I mean decorate their user profiles with glittery slideshows, quizzes, lists of favorite bands, and plenty of other features that both MySpace and the old Facebook profile offered, that the new Facebook design de-emphasizes. Developer Stanislav Shalunov wrote perhaps the best thought piece on this reality, a month ago. As he puts, it there are two types of users:

Giggly 75% like pokes, quizzes, pic forwarding, fun games, selling friends, glitter on profiles. They express themselves through style and interact with friends using the mouse

Serious 25% like bookmark import, utility apps, discussions. They express themselves with text and pictures containing them and interact with friends using the keyboard. Because you’re reading this, and made it this far, you’re serious. (Giggly users tend to not read much at all, certainly not blobs of text, and quite certainly not my blog)

That’s the thing. Here in Silicon Valley, we’re minimalist snobs about decor. You don’t see many pink flamingoes in the front yards of Palo Alto Eichlers or San Francisco Victorians. I’ve personally deleted every tacky-looking application from my profile page after installing it, just so I could keep my profile looking “clean.”

Facebook’s new design, as many of us have been noting since the company began testing it months ago, seems to emphasis features also seen in trendy new web services favored by us self-styled “early adopter” types. While Facebook offered status updates before messaging service Twitter existed, Facebook now features a box at the top of its users’ profile pages that asks each user to broadcast what they’re doing — similar to Twitter. Facebook also just launched an iPhone application built around its status message service, not its more general profile features.

While Facebook offered news feeds of your and friends’ activity on the site before FriendFeed existed, Facebook’s homepage now highlights the “news feed” of friend activity and profile pages of each person’s “mini-feed” of activity. What’s more, while FriendFeed has always offered ways to let you automatically import your actions on other sites, Facebook has been working on this, too. So when you post photos to Flickr or vote on a story on Digg, those actions can appear in FriendFeed — and now Facebook. Facebook also recently added the ability to comment on feed items. One of the features that makes FriendFeed popular.

In fact, many “early adopters” have been gleefully speculating that Twitter and Friendfeed will eventually kill Facebook because those services more openly enable the flow of information between other sites and their own.

Maybe Facebook employees should stop reading us Silicon Valley blogs, and our constant chatter about Twitter and Friendfeed.

Facebook employees have been pondering why only a fraction of its users don’t seem to actually share that many links to other web sites using its “share” feature. The new profile seems to confront this perceived problem.

The new profile emphasizes sharing by making the options to share photos, videos, notes and links really obvious — at the top of “news” feeds and right above the Twitter-like status update box on the profile mini-feeds.

Clearly, Facebook thinks that if it forces users to share stuff, then they’ll really start sharing stuff. I wouldn’t be surprised if Facebook product managers are thinking “phew, now we’ve cut off the threat of Twitter and Friendfeed taking our users!”

It wouldn’t surprise me if Facebook sees a sustained protest from millions of users who don’t care about publishing, in the first place, who just want to decorate their profiles to show off to their friends. After all, the redesign seems to require a tour for many people, as Svetlana Gladkova notes over at Profy. Maybe, though, Facebook can educate the masses on the joys of publishing.