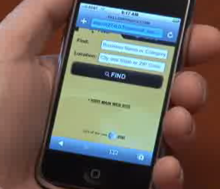 When I upgraded from my Motorola RAZR to the original Apple iPhone last year there was only one thing I missed about my old phone: Voice dialing. As advanced as the iPhone is, even the 3G version still lacks this feature which many other cellphones have. That may not change anytime soon but something cooler involving voice input appears to be on the horizon for the device.

A new demo video has been released showing off AT&T’s WATSON speech recognition engine; AppleInsider has the video.

Basically, the technology will allow you to speak the word or words you want to place into application input fields and it will translate them into text. This will be very nice for say, looking up directions; which can be a pain when you live in a city with 12 letters (San Francisco). AT&T shows off the technology in the video using the YellowPages application on the iPhone.

As AppleInsider notes, this will only work for applications that have fast connections to AT&T servers. Sadly, “As-is, the technology doesn’t satisfy frequent requests for voice dialing or other direct speech recognition features.”

This WATSON technology will work on other devices besides the iPhone as well.