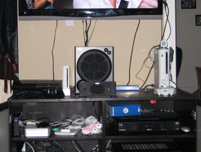 I complain quite often about needing too many set top boxes to make the ultimate living room entertainment center. Really though, it’s not the boxes themselves that drive me crazy as much as its their wires. While wireless power may still be a ways off, a step has been taken towards wireless connections with the television.

Sony, Samsung, Motorola, Sharp and Hitachi are joining together to work with an Israeli company, Amimon Ltd., to make a new standard for wireless high definition picture transfer, according to USA Today. The technology is called Wireless Home Digital Interface, or WHDI.

“If you have a TV in the home, that TV will be able to access any source in the home, whether it’s a set-top box in the living room, or the PlayStation in the bedroom, or a DVD player in another bedroom. That’s the message of WHDI,” said Noam Geri, co-founder of Amimon.

Televisions built with WHDI connections could arrive as soon as next year and only cost perhaps $100 more.

Of course, as USA Today also notes, both Sony and Samsung are also backing a competing standard, WirelessHD. We call that, “hedging your bet.”