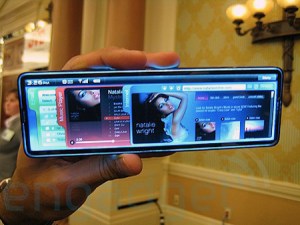 Intel is releasing the first in a series of chips that are aimed at bringing computer smarts and high-speed Internet connectivity to just about every kind of electronic device.

The new foray into low-power portable chips for the “embedded” market will connect the Internet to everything from in-car entertainment systems to handheld mobile Internet devices, said Gadi Singer, vice president of mobility at the world’s biggest chip maker.

Today, Intel is launching its EP80579 family of eight processors which combine a bunch of chips into one. The so-called “system-on-a-chip” (SoC) processors use a Pentium M computing core, based on the highly popular Centrino-branded microprocessors introduced in 2003. Next year, Intel will introduce another family of chips based on the Intel Atom core, a faster processor which is targeted at mobile Internet devices. All told, Singer said that Intel is working on more than 15 SoC processors. 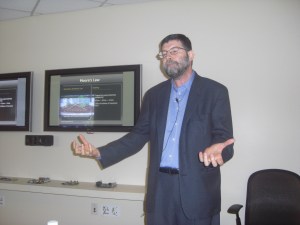 Right now, the “embedded” chips go into ATM machines, airport ticket kiosks and gas station commercial screens. The embedded market, where chips do things such as control industrial equipment, is split into 300 different sub-markets where Intel has roughly 3,500 customers. But Singer said that over time, such devices will become much more like general-purpose computers, with fast computing speeds. They will be flexible and connected to broadband networks such as WiMax, 3G or 4G cell phone systems.

“The major forces that are shaping the design of silicon have to do with the need for connectivity to the Internet, computer power, and the progress of Moore’s Law,” Singer said, referring to the maxim that chip performance can double every two years or so thanks to manufacturing improvements.

Over time, the market will shift from dumb computing devices to smart connected machines which make the Internet ubiquitous, Singer said. Today’s chips will cost anywhere from $40 to $95 and will operate at 11 watts to 21 watts at speeds ranging from 600 megahertz to 1.2 gigahertz. A single one of the new Intel chips can replace four, resulting in a 45-percent smaller area and 34 percent lower power.

Those speeds are competitive compared to other embedded chips, but ARM-based chips are typically in the one or two watt range, allowing them to be used in cell phones and other small gadgets where power consumption is paramount. The race is between the two companies on who can get the right combination, as ARM speeds upward in performance while Intel moves downward in power consumption. ARM chips, often used in cell phones, have typically run in the few hundred megahertz range. 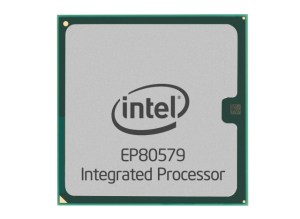 Among those competing with Intel in this market are ARM licensees such as Nvidia, Samsung, Texas Instruments and others. Intel had its own ARM-based chips, the StrongArm (Xscale) family, but it sold that off to Marvell. Now, Singer says, the company is making another run with PC-compatible Intel cores.

In the future, Intel says its chips will be more competitive with chips based on the ARM architecture, which is the primary choice for low-power gadgets and cell phones. Singer said the company believes there will be 1.2 billion mobile Internet users in 2012 and 100 million TV households watching Internet video by the year 2011.

Beyond the embedded market, Intel plans to use its SoC chips — code-named Canmore — in consumer electronics devices this year. Next year, a chip code-named Sodaville will debut. Among the gadgets that could use such chips are Internet-connected TV sets. Singer said that in the next five years, car computers will be common. Those will display rich multimedia and access the Internet at a high speed.