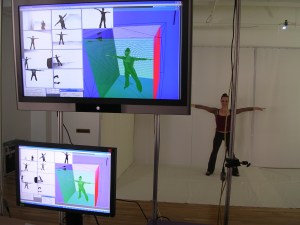 Capturing motion is a technology perfected for movie special effects and video games. It makes it a lot easier to create a computer-generated character if the artist has access to real-world character movement. Organic Motion has done well selling motion-capture systems for such purposes.

But today it’s about to embark on a promising new market in retail sales. The New York company is announcing that Swiss high-performance bike maker BMC will use Organic Motion’s technology to capture the movements of customers so that it better customizes its bikes for each person.

The deal will likely result in the deployment of a lot of systems — which include 10 high-speed cameras and cost about $80,000 — since BMC has more than 250 dealer locations in the U.S.

“We think this is the biggest deal in the history of our industry,” said Andrew Tschesnok, chief executive of Organic Motion. “It helps them fit a bike to a specific rider and they can do this in any store.”

The product is the brainchild of Tschesnok, who started developing it five years ago but formally incorporated the company in 2006. While other motion-capture technologies use markers such as fluorescent balls attached to body suits or light-sensitive make-up to capture motion data, Organic Motion uses no markers at all. Rather, it uses multiple cameras and software that can stitch together a 3-D view of an object to get motion accuracy down to a few millimeters.

“We really changed the cost equation,” said Tschesnok. “You don’t have to put on a body suit. Anybody can jump in and be measured. So it can move from research to general practice. It goes from entertainment content creation to the retail market.”

The opportunities in retail are big. You could swing a golf club and an untrained clerk could recommend the club that is just right for you, Tschesnok said.

Competitors use traditional motion-capture suits and markers to capture images.  Mova and Image Metrics can do facial capture. In the low-cost consumer product realm, where Organic Motion doesn’t play, companies such as 3DV Systems are capturing data for motion-controlled video games. But the data isn’t as accurate as Organic Motion’s. Motion Analysis is a leader in motion capture.