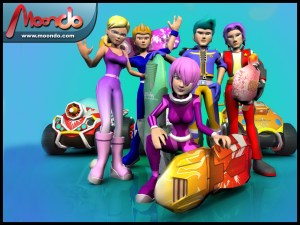 Funtactix wants to set itself apart in online games by addressing one of the most annoying problems: the inability for users to take their game characters and achievements from one game to another. With the Moondo cross-gaming universe being unveiled today, you can do just that.

So far, the universe is small with two games involving shooting and racing. But Sam Glassenberg, chief executive of the Menlo Park, Calif. company, says the company’s 3-D engine allows it to churn out new games every eight to 12 weeks. A new selection of sports games will debut in August. With each game, players can reuse their own avatars, or animated game characters, and their “power ups,” which give them special powers such as better speed or armor.

The games are a step up from simple Adobe Flash games and require a 90-megabyte download. That’s a barrier to some gamers, but it’s not a huge download burden. By October, Funtactix plans to introduce a browser-based version of the cross-gaming universe. Glassenberg says that most games build up barriers that keep you from going to another game. In online multiplayer games such as World of Warcraft, the last thing the company wants you to do is take your character and go to another game.

But the Funtactix games are more casual, with sessions typically lasting two to five minutes. Glassenberg says mainstream players who appreciate variety will like Moondo.

The games have been available in a limited beta since February. Funtactix was founded in 2006 by Yaron Leifenberg and Ilan Graicerand. The company received $6 million in a first round of funding in 2007 from Benchmark Capital and Jerusalem Venture Partners. Glassenberg, former lead program manager for DirectX graphics at Microsoft, joined five months ago. The company has 25 employees, with most of the development team in Tel Aviv, Israel.

The company’s idea of porting characters and achievements across games faces no direct competition today. IBM and Linden Lab announced earlier this year that they were exploring the idea of making avatars portable across virtual worlds, but retrofitting their games to support such capabilities would require a huge amount of standardization. With so many worlds, it would be tantamount to boiling the ocean.

Microsoft and Nintendo have endorsed the idea of cross-game play to some extent. Microsoft talked at its E3 press conference about letting players create their own avatars for Xbox Live. In casual games such as Uno, players can use their avatars inside the game. Likewise, Nintendo Wii players can create their own Mii avatars, which they can use in games such as Wii Sports or Wii Fit. However, those players can’t take their achievements in one game and apply them to another.

Funtactix has thousands of players already. When it put up its second game earlier this year, usage of both games shot up 80 percent. And the number of game sessions played by new users jumped 250 percent. The games include Slider Party, a fast-paced shooter game where players can play in groups in a light-hearted style; Boost, a high-speed racing game where players race customized vehicles head-to-head; and Crystal Run, a team-baesd “capture the flag” game with a top-down view.

The real hurdle for the company will be game quality. Games made in eight to 12 weeks just aren’t going to compare to some of the hardcore fare out there. On the other hand, the cross-game play will allow Funtactix to set itself apart from all of the other casual game companies, ranging from Gaia Online to PopCap Games. The games are free to play now and will be ad supported. Over time, Moondo will add virtual item transactions and other business models.