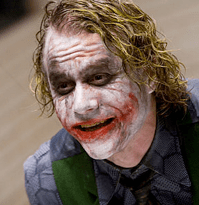 The new Batman film, The Dark Knight, is obliterating box office records left and right. It recently passed the $300 million domestic box office mark faster than any film ever (by 6 days!) and should do the same for $400 million. Some are even saying it could threaten Titanic for the top grossing domestic movie of all time. But for all that success, its reception on the web has been arguably even greater. After all, it is now the number one movie of all time, according to the Internet Movie Database’s (IMDb) Top 250 list.

Now don’t get me wrong, The Dark Knight is an excellent film, the best one I’ve seen this year in theaters. But are we really prepared to say it is better than films like The Godfather? I’m of the mindset that it takes a bit of reflection, context and multiple viewings to declare a film the best ever. On the web, the opposite seems to happen.

The so-called “wisdom of the crowds” can easily turn into a mob mentality, as The Web Services Report Harrison Hoffman details. He brings up the situation that arose when the social news voting site Digg censored a code to decrypt HD-DVDs that had been submitted to the site. The Digg users, normally praised for their ability to pick the best stories on the web as a group, revolted. It was not pretty. Soon nearly every story on Digg’s front page was a copy of the code.

This hive mind mentality could well be driving The Dark Knight’s score on the IMDb as well. The movie has an average rating of 9.3 out of 10 right now, the number two film is at 9.1. Something else that is interesting is that The Godfather, which was previously number one, has fallen to number three. This is odd since there appears to be no reason why The Godfather would gain a significant number of negative votes at this time. Instead, this could be a case where The Dark Knight fans were trying to ensure their movie would stay at the top and were voting down the competition, as film site /Film observes. 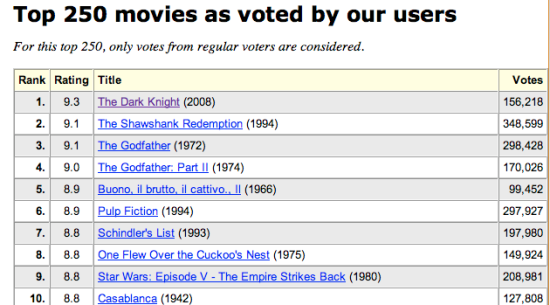 But fear not Godfather fans, in the past these situations on the IMDb have tended to work themselves out. I recall that after the release of The Lord of the Rings: The Fellowship of the Ring back in 2001, the film immediately surged to the number one film on the Top 250 list. For a little while it was so far ahead in fact, that it looked like it was the best film ever and no other film was even close. But even a hive mind falls victim to time. Eventually, more people saw the film and the score slowly came down. Today, the movie is number 20 on the list.

With over 150,000 votes for The Dark Knight already tallied on the IMDb, the come down will take longer, but I suspect it will happen. After all, have you seen the trailer for the new James Bond film, Quantum of Solace? (Below.) That has number one movie of all time written all over it.


Quantum of Solace Trailer in HD from Usoccers Page on Vimeo.