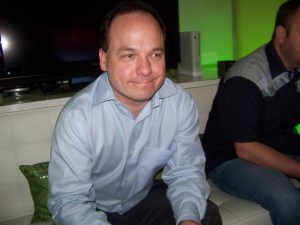 John Schappert is the corporate vice president who runs pieces of Microsoft’s game business such as its Xbox Live online gaming service. One of the new front men for Microsoft’s game efforts, Schappert is a seasoned game developer who started Tiburon Entertainment, which Electronic Arts bought in 1998. He left his job as the No. 2 executive at EA’s game studios to take the Microsoft position. I caught up with him after he took the stage at the recent E3 game show.

VB: What was the thinking behind the changes to the (newly announced) Xbox Live dashboard interface? It’s your biggest change to what gamers see on the console since you introduced the Xbox 360 in 2005.
JS: We’re happy with the “blade” metaphor that we used in the original Xbox 360 interface. It was the first video game box where you could turn it on and enjoy games right from the hard drive through Xbox Live Arcade. You could buy games on Marketplace. As we added more and more content, it became more difficult to navigate. As we added more features — video marketplace, instant messaging, and video chat – we started to think of where we wanted to go in the future. We wanted to have it be more fun, simpler to use, easier to navigate, and more social. We wanted to think about features like Netflix. We have 20 million people now. They enjoy playing “Call of Duty 4,” “Halo 3” and “Gears of War.” When we think of the next 20 million, they may enjoy those games but they also might enjoy a different level of experience. What we hoped we accomplished is an interface that the core will enjoy – because of its visual style, better search, more functionality — and more appealing and inviting for the new users buying our console. To me it is part of the puzzle. It’s about approachability, it’s about content, and it’s about price. We will go after all of those areas aggressively. 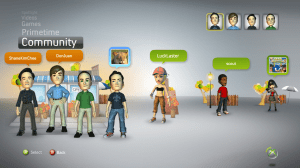 VB: What was the genesis of the Xbox Live avatars you introduced at the show?
JS: We are all gamers ourselves and we’ve enjoyed our own avatars in a multitude of games. We have had achievements on Xbox Live from day one. We’ve had gamer scores. We’ve had the (single identification) gamertag. People have their own web sites with XML links to our data. To me, avatars are a logical extension to give us countless ways to personalize our own styles. It’s not like we are using avatars to recreate the perfect human body. And it’s not too cutesy. It’s in the middle. It dresses up the core first-person shooter, who can be edgy. And the more casual player can dress up to look friendly.
VB: When you compare this to the Mii avatars on the Nintendo Wii, what is your reaction?
JS: What do you think?

VB: It doesn’t look like it was done in reaction to the Miis, even though the Miis came first.
JS: The work was going on for a long time. It was done at our Rare studio. I have to make a shout out to the Miis and say that Nintendo did a phenomenal job integrating them into the Wii games. There was a lot of inspiration from them. At the same time, it’s a logical evolution of our gamertags on Xbox Live. It was a question of when to introduce it. 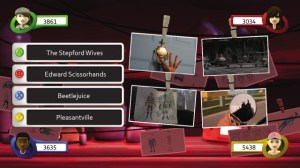 VB: Will you have micro transactions with the avatars?
JS: That may be in the future. In the near term, we want to launch these with great customization and a great library of accessories this fall. I think there is a lot more we can do with them. You will see us continue to add experiences that make use of the avatar. Our goal is not to create a sterile environment where you move furniture around. It’s about how can we make our gaming experiences better. That is why you see the first usage of avatars will be in games on the Xbox Live Primetime channel like 1 vs. 100, Scene It? (pictured above) and Uno Rush. What’s nice about the avatars is they can be your gamer persona for your online profile picture or your in-game person. Your avatar can be your in-game person. 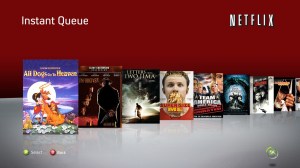 VB: Are your video download deals with NBC and Netflix coming easier now that you have proven sales in that area?
JS: We hit a tipping point with Xbox Live Marketplace last year. The Halo 3 map packs sold well. Activision mentioned they did a million downloads of their map expansion pack download for Call of Duty 4. The “Rock Band” and “Guitar Hero” song downloads are doing well. Marketplace is an extension of the experience. It’s picking up a lot of steam. Now that we have 12 million members, it’s easier to get a response from partners. We have more high-definition online video content than any other provider. We have 45 partners, 6,000 hours of content, 10,000 items, and our Netflix deal will more than double our library. The Xbox Live Gold members (who pay $50 a year) will be able to see Netflix Instant Watch movies for free. 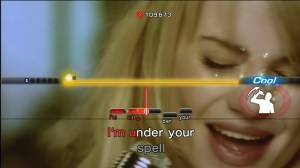 VB: How do you get some of the same consumers the Wii is getting?
JS: It depends on approachability of the box and the user interface. We need good pricing and we need good content. We have great games coming for the core from “Resident Evil 5” to “Gears of War 2.” Gears of War 2 will be the best-selling title this fall. We finally got a massive base of users, between TV game shows and entertainment. We also sold great social games, like Rock Band and Guitar Hero. About 80 percent of the downloads happen on our platform. We’ve got our new singing game, “Lips” and the “You’re in the Movies” video-oriented game. We’ve got great social experiences, a new user interface, and games for the core and games for the masses.

VB: With the recent price moves, there is less of a price spread between your mainstay unit and Sony’s mainstay unit.
JS: In Europe, we have lower prices and it has flown off the shelves like hot cakes. Remember that 75 percent of the units sold at $199 or less in the last generation. I feel confident we are riding the price point down better than our competition. We believe we will outsell the PlayStation 3 during this entire generation. We have more entertainment than any other box. We’ve got more games than any other console. More higher-rated games than any other console. In the last 12 months, we have sold more titles than the PS 3 and the Wii combined.

VB: There were other rumors of things. A motion-sensitive controller. Did you study that?
JS: You know our answer but it’s good of you to ask. We would be remiss if we did not invest in new technologies. We are always doing that. We were proud at this show that we had great games for our core audience. We had a brand new Xbox interface. New casual games, new video partners, and the Netflix partnership. That’s what our focus is on now.

VB: I have a small number of Xbox Live friends. But I have a lot of Facebook friends. I’m a Facebook slut. I’m happy with that. But is there an opportunity there to close the gap and make Xbox Live much more social?
JS: If you put your gamertag in print, you will have a lot of Xbox Live friends. I’ve been remiss in not mentioning our Live Party. That underscores our social network emphasis. We are the largest social network connected to your TV. With Live Party, the goal is to play and chat online with your friends. You don’t have to sync with them and you don’t get disconnected. And you can hang out with them on a virtual couch. You can enjoy movies together, play and pause them, and banter over the movies. We will continue to go down that path. 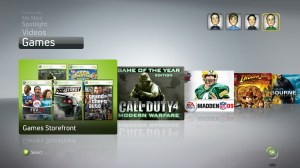 VB: My reaction to the Microsoft press conference was that you dealt good blows against Sony, like getting the “Rock Band 2” exclusive for the Xbox 360. You didn’t really strike at Nintendo. And some of the most interesting rumors about what you were doing weren’t true. So you didn’t surprise us enough.
JS: I think it’s less about chasing someone else and about how do we continue to innovate. The new Xbox interface is not about chasing a competitor but more about creating new experiences for our gamers. Xbox Live Primetime is giving people a more visual experience for perusing our 20,000 items on Marketplace. People are talking about the Xbox not just as a game machine but as a device that delivers entertainment to the living room.

VB: The Netflix deal stands out as more important. Like maybe it will be the end of Apple TV. Why would you want other boxes for movies?
JS: Through the power of software, we can change the functionality of the Xbox 360. That’s the beauty of it. We saw Netflix had a cool new feature that could go with our box. Our job is to provide as many entertainment options as we can to our consumers.

VB: And you aren’t that interested in a Blu-ray player on the Xbox 360?
JS: Sony announced they’re going to have their own video store on the PlayStation Network. That validates our own view that the future is not about an optical-format battle. It’s about having movies delivered to you digitally. They announced seven partners. We have 45 today. We think that digital distribution is the way to go.