Updated with more information, including about the company’s new app recommendation service 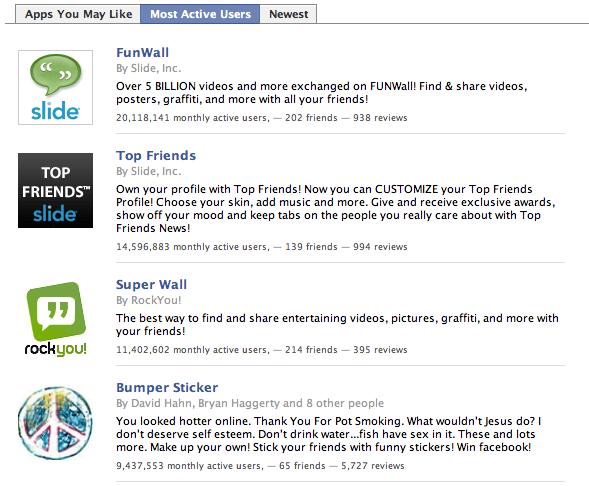 Facebook seems to be signaling third-party application developers that its priorities have changed. Today, it has altered its public measurement listing of an application’s traffic from daily active users to monthly active users (see screenshot). The measurement is of unique users, and doesn’t include multiple visits by individual users. The message from Facebook seems to be: Focus on applications that are engaging enough to keep users coming back every month, but they don’t need to be totally addictive.

[Update: A company blog post explains more about the changes:

For example, a movie application might be something users only visit on the weekends. Or a rent splitting application may only be used by roommates once each month.

Both are part of Facebook’s ongoing efforts to make applications more relevant to more users.]

Facebook started out measuring number of total installs of an application when it launched its developer platform last summer. But it switched to listing daily active users within months of the platform launch. That move seemed intended to get developers focused on building applications that people used all the time, not applications that they used once and forgot. Meanwhile, as rivals like MySpace launched their own developer platforms this past year, they measured applications’ total number of installs, as Facebook had originally done.

This is more of a public message from Facebook than anything else, because developers rely on their own traffic measurements, too. They build their own tools for measuring traffic, or use increasingly advanced analytics services from companies like Kontagent, that let them cross-reference detailed tables of information, like pageviews, demographics and rates of growth change.

Also, Facebook itself and other large web businesses measure themselves — and are in turn measured by third parties like comScore — using the metric of monthly unique visitors. By using the same metric for its applications, Facebook is maybe trying to share another message, as well: Developers, think of yourselves as real web businesses, not just as fun little things on Facebook.