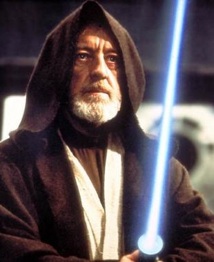 My iPhone is quickly becoming a repository for applications that are being removed from Apple’s App Store. Today’s latest victim is PhoneSaber, the simple yet compelling app that uses the iPhone’s accelerometer to turn the device into a lightsaber.

The problem in this case lies in that the lightsaber is the laser sword made famous by the Star Wars films. Lucasfilm, the company of Star Wars‘ creator George Lucas, apparently doesn’t like the unauthorized emulation of its property and asked Apple to remove the application, according to Macenstein.

A quick search for the app today shows that it is in fact, gone.

Before everyone gets into a tizzy, there is, ahem, a new hope. Apparently THQ Wireless, which works with Lucasfilms on mobile Star Wars merchandise is willing to work with PhoneSaber’s creators, TheMacBox. The end result may simply be a very similar app that includes the Star Wars official branding to promote the films, according to a post on TheMacBox blog. The team notes that it doesn’t yet know if THQ will want the new app to be free or not yet.

And so for now, just like Obi-Wan Kenobi in Star Wars (technically Episode IV: A New Hope) PhoneSaber has vanished into thin air. It follows BoxOffice, NetShare and I Am Rich as apps that have been pulled completely from the store by Apple. Unlike those however, at least we know why PhoneSaber is gone.