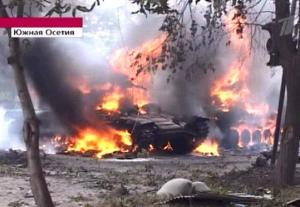 As Russian tanks roll into Georgian territory, Georgian web sites are also under attack. The Georgian embassy in the United Kingdom has accused Russia of launching denial of service attacks against Georgian web sites, according to published reports.

Since Russian troops attacked the breakaway Georgian province of South Ossetia on Friday, Georgian sites have been hit with “denial of service” attacks that throw so many packets at the sites that they effectively shut them down.

In response, the Georgian government is posting updates on Blogger in hopes of stirring up sympathy for the former Soviet state in the Caucausus mountains. Poland has posted news from Georgia, including a statement from Georgia’s president, on Poland’s official web site. While there has been no confirmation yet of official Russian involvement, the attacks are similar to the May 2007 “cyber war” between Russia and Estonia.

Last year, I heard a speech at the Black Hat security conference about the matter by Gadi Evron, a former Israel government security manager who was in Tallin, Estonia, at the time of those attacks. He chronicled the attack where large numbers of hackers from Russia attacked Estonian government sites after that country removed a statue of a Russian soldier. The decision provoked rioting by ethnic Russians as well as DoS attacks. In the article, Evron said that NATO has agreed to do research on new ways to respond to future cyber attacks.

Apparently, that’s not going to help Georgia. But a Wired article notes that Georgia has received military training support from the U.S. for years.