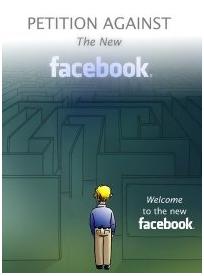 “Errric! Write something about this new Facebook design. It’s so confusing….! Ahhhh!,” my sister wrote recently on my Facebook wall. I pointed her to the article I’d written describing that issue — indeed, nearly 130,000 people have already joined the largest of several groups protesting the redesign since it launched a few weeks ago. But the changes to the site take advantage of a trend in sharing within Facebook, and a new study suggests that Facebook is the most popular site for sharing links from around the web, after email.

If the site redesign accomplishes what it intends, more users will spend more time on the site, especially valuable post-college users.

First, about the study. Today, social bookmark sharing service ShareThis released a report showing the relative percentages that its users share articles to various social web sites. The service, a widget that appears next to articles as well as as a browser bookmark, provides a new look at a variety of sharing-focused web services.

Email received 38 percent of all shared items on a given day, and the usual suspects showed up, as well: Social news aggregator Digg comes in at seven percent, the bookmarking sites StumbleUpon and Delicious and news aggregator Reddit came in at four percent. The surprise was that social network MySpace came in at fourth, with six percent — and Facebook came in second at ten percent. 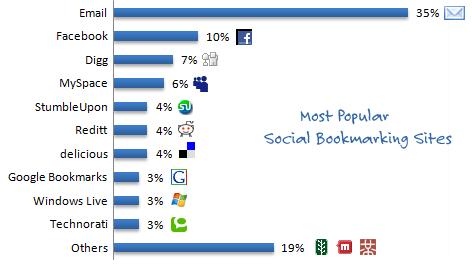 As a snapshot of sharing on the web, ShareThis gets around 15,000 shared items per day, chief executive Tim Schigel tells me, with almost half a million per month. The number of shared items has increased quickly, especially over the past several months, he says, and has otherwise grown rapidly since it launched in mid-November of last year. It is currently used by more than 50,000 sites, including a range of tech and finance blogs, like this one (click on the green sideways triangle to share this article!).

So does this study help justify the Facebook redesign?

The issue with the new design is that it’s “confusing,” but this confusion seems to come from the sharing-oriented changes to the site, especially to the profile page.

The “wall” of messages is now integrated with each person’s personal feed. The glittery “self-expression” third party applications appear on a separate tab, not the main profile page; the new profile page only includes the mini-feed and basic features like a profile picture. The top of both the news feed homepage and profile mini-feed page both now feature ways to update your personal status with a brief message, share photos and videos, write long-form notes, and share links. Each shared item can also be commented on, driving further social interaction — and reason to share something in the first place.

Until the ShareThis study, it hasn’t been clear how frequently Facebook users were sharing links before the redesign. Facebook employees had been saying for months that they were surprised by how little people wanted to use their site to share, I heard — although I never heard any specific numbers. The ShareThis study mostly happened before the redesign, from my understanding, so presumably Facebook’s internal data was more promising than Facebook employees were letting on. It’s also not yet clear if the changes are already helping (or hurting), or how much they might once the redesign is fully available.

In fact, there is precious little publicly available data about the success of the Facebook redesign since it was introduced in late July — aside from the scattered protests. Also, the company has put the redesign fully into place for an unknown but widespread group of users, too, which just makes trying to understand this data more complicated.

The value in sharing, though, is more people spending more time on the site, sharing and talking about interesting information. Facebook already uses its feeds to run ads targeted based on demographic information. As the stereotype goes, older users are typically wealthier and worth more to advertisers. And, these users more potential customers for third-party applications that integrate e-commerce, virtual goods, and other features.

But why are social networks so popular for sharing?

Is it because both of the leading social networks are tens of millions of users larger. Facebook has millions more photos shared than Flickr and other photo-specific sites. So maybe these sites are also popular because social networks provide a “social graph of all your friends,” such as what both MySpace and Facebook emphasize through features like news feeds. 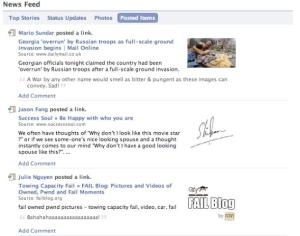 In fact, I’ve been using the “Posted Items” tab quite heavily since it was introduced within the redesign. My friends on Facebook are more diverse than my friends on smaller services like Twitter and FriendFeed, so I get a broader perspective on the world based on the links they share (no offense, anyone).

ShareThis’ own traffic comes from multiple sources, one of the many caveats to this data that Marshall Kirkpatrick points out. If ShareThis happens to be used by blogs read by people who share on a particular site, then this data is skewed. Some users, like this blog’s readers, probably don’t use sites like MySpace as much as they use Facebook or email. To add to the complications, ShareThis has been signing up new sites quickly, and Schigel also says it has some big ones in the works.

Indeed, differences in users might also explain why sharing appears relatively more popular on Facebook than MySpace in this study. To invoke a number of crude socio-economic stereotypes that I didn’t perfectly come up with, people who like to share items on the web are better-educated, wealthier, older and less interested in “self-expression.” So are Facebook users, maybe.

Social networks are looking more and more like the glue that holds web services together. All of the implications aren’t clear, but the trajectory is for the amount of value these sites provide. At least that’s what the SharedThis study seems to suggest. The Facebook group I linked to in the lede has grown by 15,000 users in the last eight hours. Then again, this protest is reminiscent of the news feed protests that occurred after that feature was rolled out en masse to the site.