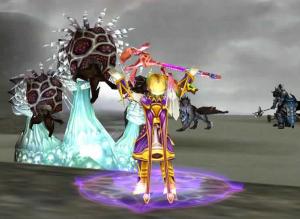 Online game companies are coming out of the woodworks. One strategy is to take the newly popular “free to play” model from Asia and to launch it in the U.S.

Wicked will publish three games from Yedang, including “PristonTale 2,” an online game with 1.5 million registered users in Asia. That game was developed over four years at a cost of more than $10 million. Hence, Yu said that Wicked hopes to differentiate itself from the crowd of rivals through high quality.

The company will also publish “PristonTale” and “Ace Online” in North America this year. Most massively multiplayer online games — where players can simultaneously wander through virtual worlds as large as cities — run on subscription models. World of Warcraft has more than 10 million subscribers. But free-to-play games are supported through either virtual item sales or ads.

Yedang Online’s most popular game is “Audition,” a dance title with 100 million users worldwide. Wicked Interactive will not be publishing that title. Yu said that the company plans to license games from publishers for the next few years.