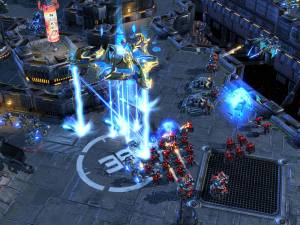 The original “StarCraft” is one of the most successful video games of all time. The sci-fi real-time strategy game debuted more than a decade ago and had sold more than nine million copies by spring of last year.

No doubt the sales would have been even bigger if the game had global distribution from the start. With years of experience in China behind it, the game publisher now looks like it will be aggressive about launching the game early in China.

Now the time is nigh for the sequel from the Blizzard Entertainment division of Activision Blizzard. The video game publisher announced today that NetEase.com will distribute “StarCraft II” for Blizzard Entertainment in China. NetEase.com will host the game on its online multiplayer game service. It has also licensed older Blizzard games including “Warcraft III: Reign of Chaos,” “Warcraft III: the Frozen Throne,” and the Battle.net technology behind Blizzard’s online games.

StarCraft II promises to be huge. It’s a game where a variety of players can square off against each other, playing one of several alien (or Earthling) races. The action is fast and furious. Like a chess game, you can either set up for a fast defense or a fast attack. But the players all make their moves simultaneously and the action plays out in real time. The scene pictured above (from Starcraft 2) is typical of the frenetic action of the game.

The two companies will set up Shanghai EaseNet Network Technology, a joint venture which will provide support for the operation of the games in China. It is interesting that Blizzard did not choose its current partner in China, The9, which operates the “World of Warcraft” online game. (Maybe the partial ownership of The9 by Activision Blizzard’s rival, Electronic Arts, has something to do with the choice of NetEase.com). Worldwide, WoW has more than 10 milion subscribers, but many of them are in China.

The NetEase.com deal will last three years with a one-year mutual renewal clause. This deal should prove critical in determining whether Starcraft 2 garners a bigger audience than the original. If Blizzard has chosen well, then it will grease the skids for yet another mega hit.