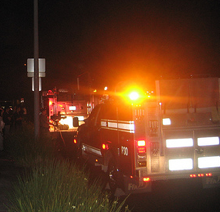 A three-alarm fire broke out at one of Apple’s buildings on its Cupertino, Calif. campus last night around 10pm PST. It burned for more than three hours before firefighters were able to get it under control, according to The San Jose Mercury News. No one was hurt in the incident.

Despite early rumors that it was an Apple research and development center that was burning, the building, known as Valley Green Six, is actually an IT data center, according to AppleInsider. So don’t expect this to be a setback in the innovative products Apple has been churning out over the past several years.

The building was located at 20705 Valley Green Dr. which is just outside of Apple’s famed Infinite Loop, where its main headquarters is located (see map below).

Over 60 firefighters showed up to take care of the blaze, which burned the building’s roof and second floor. It is thought to have started under an air conditioning unit, Santa Clara County Fire deputy chief Hal Rooney told The Mercury News.

It’s been said that when Rome burned, its leader, Nero, fiddled. (It was probably technically a lyre, but I digress…) You can be sure Apple chief executive Steve Jobs was doing no such thing.

Flickr user jessicaspacekat has some pictures from the scene.