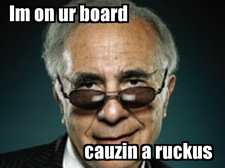 Icahn haz board members? — Billionaire investor Carl Icahn is already on Yahoo’s board, but now he needs to fill the two complimentary seats given to him by Yahoo. Edward Meyer and Frank Biondi are the two front runners in AllThingsD’s Kara Swisher’s mind, but it could be her wild card, John Chapple, who gets to sit next to Biondi, according to The Wall Street Journal. They all kind of look the same anyway and all have the same basic title: “Former CEO of ______” (fill in the Fortune 500 company).

YouTube nixing live streaming service plans? — The service would add to costs, and there is still no good way to monetize any video on the Internet, let alone live streaming video. Live videos are also another potential legal headache in keeping copyrighted material off of streams, as a source tells Silicon Alley Insider.

Computer scientists come to defense of DefCon hackers — Eleven computer scientists from around the country have come out in support of the three MIT students that were banned from speaking at DefCon. They’d like the gag order imposed by a Massachusetts judge on the trio lifted, says Wired.

Silk Road adds to its first round — The stealthy medical device company is taking an additional $2.4 million, bringing its total series A round to $3.4 million, VentureWire reports. The round was led by Vertical Group. 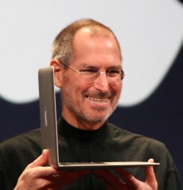 More powerful MacBook Air soon? — It seems inevitable that Apple will update its super thin computer sometime soon. A report by PhoneNews (and republished by Engadget) says the new version is imminent, with an Intel Core 2 Duo chip of the Penryn variety. That should make the device much more powerful.

Google Map Maker rolls out to 40 new island nations — And Google keeps getting the web at large to do their work for them, without that side effect of money changing hands.