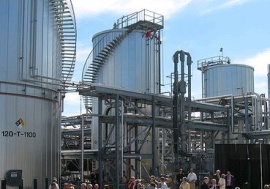 There’s a bad moon on the rise for Imperium Renewables. The biodiesel maker has lost a major contract that was one of the lynchpins holding the company together, according to the Seattle PI’s John Cook, who has been chronicling the company’s rise and fall.

Imperium, as you may recall, is a biofuel startup founded in 2004. It hit a growth streak in 2006 and secured a massive $113 million investment the following year, as hype grew around the biofuel market. Imperium’s investors fast-tracked it to an IPO, which was announced three months later, even as losses at the company mounted. Another half-year later, Imperium had lost its CEO and put its IPO plans on ice.

The company’s rocket-ride to fame and fortune — followed by the attendant explosion — draws an interesting contrast with A123 Systems, an early entrant on the cleantech scene. In fact, it’s debatable as to whether A123 could have been classified as “cleantech” at all when it started. As Rob Day recounts, the company was founded in 2001 at MIT with the idea of making superior lithium-ion batteries. Not for cars, but for power tools.

That’s not necessarily a small market, but compared to A123’s newer ambition, supplying cells for electric vehicles, it certainly held less potential. Regardless of the end market, it was essentially a technology play: Could the company produce a high power, safe battery, better than existing ones? The company’s valuation rose slow and steadily as it reached milestones. By 2006, its fundings valued it at $125 million.

Contrast that with Imperium Renewables, which was hyped from its very first outside investments. Investments came fast and furious, and within a year or two of its first funding, Imperium was saying it was worth $1 billion, through the planned IPO.

A cynical observer might call Imperium’s sharp upward trajectory, and the massive hype surrounding the company in its early days, a cash grab by VCs hungry to capitalize on a booming new market. Of course, there are plenty of possible explanations for Imperium’s failure to shine, like the volatile markets for both fuel and feedstocks, not to mention the uncertainty of any new technology. But it’s certainly a very different story from A123, which limited its initial ambitions, and thereafter plodded, over a period of seven years, to its own current $1 billion valuation (no word on the value of the IPO yet, but chances of it failing to happen look low).

Count on seeing some of the other hyped entrants flaming out sooner than most of the successes come through. For instance, consider the developing story of Solyndra, which Green Light is tracking. Despite filing multiple patents, the secretive (but very heavily funded) company’s key scientists and early employees seem to be fleeing.

And in another hyped area, cellulosic ethanol, Robert Rapier has run the numbers on Coskata, the cellulosic ethanol startup that came out of nowhere earlier this year with plans to take over the world, and pronounces it a “Dead Man Walking”, based on the costs of its pilot plant. Coskata’s founders and investors, one of whom I recently met with, would strongly disagree, but it certainly fits the profile of a high-flying, fast-moving startup making a very large bet.

Meanwhile, at the single giant refinery Imperium operates, staff have continued to show up for work, but shipments have not been arriving for refining, according to Cook. For the moment, it’s one to keep on deathwatch.