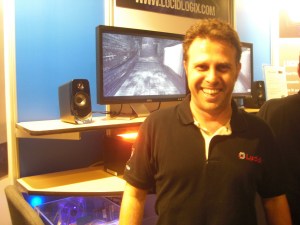 It seems obvious that the graphics chip wars are done, as far as start-ups are concerned. Intel is squaring off against Advanced Micro Devices (which bought ATI Technologies) and Nvidia. There is no obvious nook in this multibillion-dollar market where a start-up could thrive.

But somebody forgot to tell that to the folks at LucidLogix Technologies, an Israeli graphics start-up that came out of stealth today. They’re not doing a graphics chip. Rather, they’re doing a chip that serves as a kind of traffic cop and enables multiple graphics cards to be used together in parallel processing fashion.

Graphics experts might scratch their heads at this vague explanation. Nvidia does what I just described with its SLi technology for ganging together up to four graphics cards in a single PC. AMD does it with CrossFire. But when you put two graphics cards together, the processing isn’t as efficient. Maybe you get 1.5 times or 1.6 times the single-card performance. 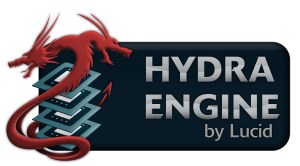 With the LucidLogix Hydra 100 chip in the system, you could get a much better result. It’s almost linear, or close to two times better performance when you put two cards together, said Offir Remez, (pictured above) president and co-founder of the company, based in Kfar Netter, Israel.

The chip sits on a computer’s main board, or motherboard, and it acts as the traffic cop, directing tasks to the different graphics cards in a system to keep them busy. It doesn’t matter if those cards are from different vendors (theoretically, an Nvidia card ought to work with an AMD card) or if those cards are different types, such as an old Nvidia card paired with a new Nvidia card. The LucidLogix chip balances the load of processing chores so that every card stays busy.

Moshe Steiner, chief executive, and Remez started the company three years ago. They were joined by a familiar figure in the graphics chip industry, George Haber, who loved the idea (10 minutes into the pitch) and agreed to become chairman.

Haber has some unfinished business when it comes to succeeding in graphics, where, once upon a time in the 1990s, there were more than 50 start-ups. He is a serial entrepreneur who started a graphics chip company late in that last war. His company, Gigapixel, created a great technology that almost made it into Microsoft’s first Xbox video game console as it was being designed in 2000. Haber’s team had the deal and even moved into Microsoft’s Silicon Valley quarters to start design work. But Nvidia’s CEO, Jen-Hsun Huang, cut a last minute deal that stole the contract away from Gigapixel. Nvidia went on to become the sole survivor among stand-alone graphics companies. And it eventually bought Gigapixel. Haber was frustrated with that result because he thought he had a better technology. (I know all of this because it was a chapter in my first book, “Opening the Xbox,” published in 2002).

But that was the last war. Haber says he’s happy that LucidLogix figured out a way to compete without going head-on against the big companies. It would be crazy, he said, to start a brand new graphics chip because it would require $200 million worth of investment and years of work just to get to the market. But Lucid completed its initial chip design with a total of $16 million in funding so far.

The investors include Giza Venture Capital, Genesis Partners, and Intel Capital. The latter is starting to make a lot of investments in graphics, including the design of a many-core graphics-oriented processor, dubbed Larrabee, coming out next year. LucidLogix has 70 employees and is expanding fast to deal with a number of customers, Remez said. The chip is expected to be available in the first half of 2009. A working prototype was on display at the Intel Developer Forum today.

Computer makers and motherboard designers would likely have to design the chip into their own high-end computers for gamers. That’s going to take time. In the meantime, it’s conceivable that big guys could figure out their own methods for more efficient parallel graphics processing. But LucidLogix has applied for 60 patents on the technology.

Historical resonance doesn’t get any better than this. It would be a wonderful company for either AMD or Nvidia to buy. Maybe even Intel. For Haber, it might mean he has a chance to sell a second company to Huang. But Remez notes that the company hopes to make it on its own.