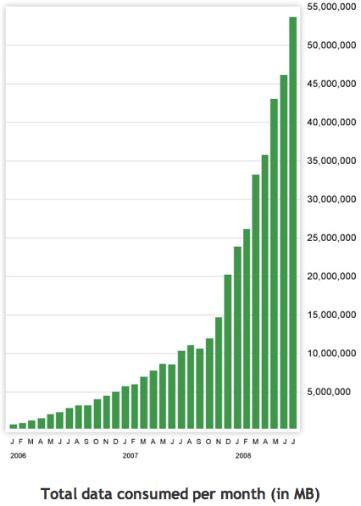 Latin America is one of the more promising areas for mobile phone usage. Three of its largest economies — Brazil, Mexico and Venezuela — are also the fastest to adopt the mobile web, according to a new report by browser-maker Opera.

Google is the most visited site in Latin America, followed by regionally popular social networks like Google’s Orkut (big in Brazil), hi5 and a regional one called metroFLOG, with Facebook creeping up, the company also reports.

Opera’s mobile web browser, Mini, is widely used around the world, so the company’s monthly “State of the Mobile Web” report on its users’ site preferences can provide an interesting look into general trends. The company highlighted Latin America this past month because of exceptional growth in the region, it says. Factors it cited include 80 percent of phones in the region being mobile-browser compatible, and the presence of relatively cheap mobile data plans.

The amount of data that Opera processed correspondingly increased by 15.2 percent to 53.8 million MB. See graph.

The report is based on aggregated, anonymous data from Opera Mini servers; the report looks at the top 100 sites for each region, and also highlights browsing trends in the ten countries where Mini is most popular, which include: the United States, Russia, China, Indonesia, India, United Kingdom, Germany, Poland, South Africa and Ukraine.