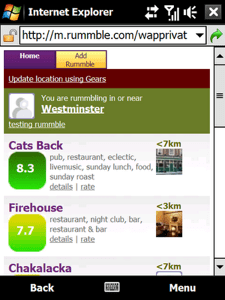 Following the official roll out of Yahoo’s Fire Eagle location-based developer platform ten days ago, a lot of responses seemed to be, “yeah that’s great, but what happens when Google comes out with something similar?” Given Google’s dominant position on the web, that seems to be a fairly common response anytime a new web service or platform emerges. But location is particularly interesting since the first phones running Google Android are close to launching. In order to compete in mobile these days, location has to be a part of the plan.

So it should be no surprise that Google announced a new geolocation service today, but what is surprising is where it works on mobile phones: On Windows Mobile. The same Windows Mobile that Android is no doubt hoping to destroy. While it’s nice that Google apparently doesn’t care about giving features to future competitors, it’s surprising this close to Android’s launch.

The reason the geolocation service is Windows Mobile-only (on phones anyway) for the time being is that it uses Gears integration. Gears is the open source project that Google is heavily involved in that allows users to use certain web applications even when not connected to the Internet. On mobile devices, Gears currently only works with Microsoft’s Internet Explorer Mobile (IE Mobile). Not surprisingly, IE Mobile only works on the Windows Mobile OS.

The Gears Geolocation APIs will also work on any computer that supports Gears, meaning those that have either Firefox or IE with the Gears browser plug-in installed.

The API works by pulling your location either from nearby cell towers or GPS to get your location. In the future, it will also be able to use WiFi to quickly pinpoint your location, this is something which Apple’s iPhone starting using before it got a GPS chip in the iPhone 3G.

Gears takes this location information and pipes it into applications that use the geolocation APIs. Currently there are two such applications: m.lastminute.com, a European restaurant finder, and Rummble, an application that helps you find interesting places based on friends’ recommendations.

Both applications seem rather rudimentary compared to most location-based apps on the iPhone and even those that support Fire Eagle. See more about them in the video below.

Google has always been about improving the web experience no matter where you are accessing it from, so this Windows Mobile location assist can’t really be seen as a bad thing, it’s just a surprising business move. Of course, as it works right now, it’s hardly a killer app, so perhaps Google has something better in store in the location space when Android rolls out.