As VentureBeat first reported last week, FriendFeed now has its “beta” testing ground site up and running. The site is open to all FriendFeed users who visit beta.friendfeed.com. The purpose of this area is to show off several new features the service is working on before it brings them to the masses.

All in all these look like excellent updates for giving users more control over the FriendFeed experience. As the service has grown in popularity, so too has the “noise,” that is the information overload as you begin to follow more users.

The service previously attempted to combat this noise with the “Rooms” feature, where users could post about things specific to a topic but perhaps not meant for their main feed. It then launched a “best of” function to show the most popular elements on the service in a given day, week or month. (Interestingly, it looks like the best of month feature has been removed, though the others remain. Update: FriendFeed co-founder Bret Taylor tells me this was just an oversight and it will be back before these features leave beta.)

While both of those updates helped bring down the noise level, it became clear to many users that a better filtering method was still needed. That’s why I speculated last week that the new beta version could feature better filtering. And so it has.

FriendFeed runs down the new features on its blog post. Here are the major ones:

You can now group the people you are following into separate clusters. This is a welcome addition as it will further help eliminate unwanted noise without forcing you to stop following people.

The default lists FriendFeed creates for you include: Favorites, Personal and Professional, but these can be customized. This is a great addition for those who were starting to feel overwhelmed by the service’s main feed of information.

The “best of” filters also work for individual Friend lists, further creating a way to tone down the noise. 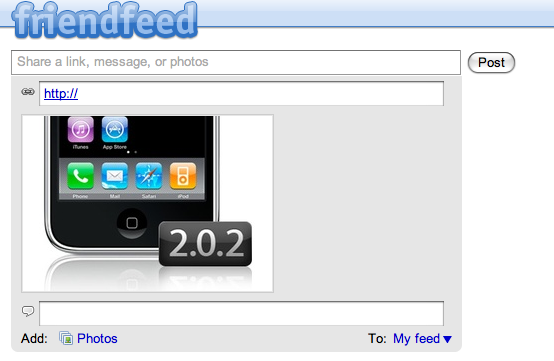 Previously, if you wanted to post photos to the service you had to do so via the Mail2FF service (which FriendFeed recently highlighted on the iPhone version site after hiring that service’s developer). Now you can do so right from the main posting input box (see: above).

The core site navigation has been moved from top tabs to the right hand side. Here you’ll find your Friend lists, your Rooms, the feeds you are piping into the service and a way to see updates from the public FriendFeed feed.

You can easily select which FriendFeed Rooms show up in this area.

The last new feature allows you to see other users’ main feeds as they see them. What I mean by this is that if I give you the link to my feed, you’d be able to see exactly what I see when I look at FriendFeed — not only my updates, but my friends’ updates as well. (Though not the updates of my friends who have private feeds.)

This is a great way to show off the service to those who might not understand its appeal, or to anyone who is new and doesn’t yet have a solid group of people to follow, as FriendFeed notes in their post.

Alongside the transition of the navigation to the right hand side, the entire site had undergone some little user interface (UI) changes. The main logo along the top has been shrunk and now sits half on, half off of the upper blue bar.

The ‘Share something’ box that resides right under the logo is now auto expanded to make it easier and more obvious as to how to post something right to FriendFeed. All hyperlinks are no longer underlined, making the site a little easier on the eyes.

FriendFeed tells us that they plan to move all of the new beta features over to the main site as soon as they receive feedback from the users.