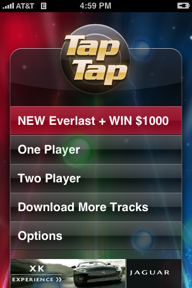 Tap Tap Revenge held the mantle as the most downloaded application on Apple’s App Store for a while. It’s a solid Guitar Hero-like music game that utilizes the iPhone and iPod Touch’s touch screen with the right price: Free. A new update out today could push it back to the top.

Version 1.2 contains the option to download a brand new song by the popular artist Everlast. The song, available for free, shows how artists can utilize games such as this as promotional tools. We’ve already seen it with the hit console games Guitar Hero and Rock Band, now we’re likely to start seeing it on the iPhone as well.

I’m playing the game with the new song right now. It’s the actual version of the song, not a cover. It’s great.

Alongside the new version and song, Tapulous, the parent company of Tap Tap Revenge, is launching a contest for players. A few rounds will take place this weekend, with the final round coming on Monday (Labor Day) with an event that will be streamed live on uStreamTV at noon PST. The winner will receive $1,000, and the finalist will get a signed Everlast CD. (A CD? What?)

This Everlast release is the first of what Tapulous is calling “Tap Tap Thursdays” (though yes, today is a Friday). “Each Thursday we will launch a hot new track by a major artist,” Tapulous owner Bart Decrem explained over email. 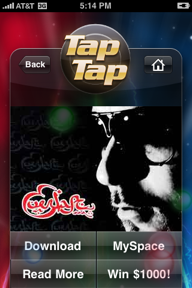 The other big news is that version 1.2 of Tap Tap Revenge brings with it advertisements. These ads are being served by the mobile advertising startup AdMob.

AdMob’s vice president of marketing Jason Spero told us recently that the iPhone will showcase how powerful mobile ads can be. Now comes a big test to prove if he’s right or not. When I talked to Decrem a few days ago, he was very excited about the prospects of monetizing the application with AdMob ads.

The ads are relatively unobtrusive, showing up on the bottom of the menu screens and, as far as I can tell, not during the actual gameplay itself.

Here’s more about the contest from Tapulous’ site:

Starting at midnight tonight, California time, so that’s 12AM PST, start playing to Stone In My Hand by Everlast, on Tap Revenge 1.2. Submit your score at the end of each game. For each game where you score at least 100,000, you’ll get one contest “entry”. Each time you submit a score of at least 200,000, you’ll get two contest entries. The more you play, and the better you play, the more entries you’ll have. This part of the contest ends Sunday evening at 5pm, California time, so you have almost two full days.

Shortly after 5pm on Sunday evening, we will randomly pick 20 semi-finalists from among all the entries and send email to those semi-finalists, using the email address associated with your Tapulous account. Make sure that you have access to a PC with a webcam, know how to use uStreamTV, and that you’re available at noon, Monday, California time, in case you’re one of the finalists. So if you don’t have a webcam, and you want to be able to participate in the finals, make sure to connect with a buddy who does have one! This may be the perfect excuse to finally buy that Mac you’ve been oogling.

Then, Monday at noon, PST we will do a live tournament, broadcast on uStreamTV. First, we will winnow the list down to 10 finalists, who will each receive an autographed copy of the new Everlast CD. Then, over multiple rounds, we will select a grand prize winner who will win the $1000 cash prize. Semi-finalists will need to show up on time, subject to a 5-minute grace period. Be there, or be square! We will also have some provisions for dealing with technical problems during the live contest.