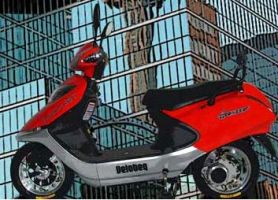 If you want an electric scooter today, your only choices may well be polar opposites in price and performance. On the low end, there are cheap bikes and scooters with low-energy lead-acid batteries, while on the high end there are powerful, lithium-ion powered scooters like the Vectrix (update: Vectrix actually uses NiMH batteries; another example of a lithium-ion user is the Brammo Enertia) and motorcycles like the Zero. Unfortunately, the latter cost as much as some cars.

The key is the battery technology. For various reasons, the price for different battery types rises in step with the amount of energy they can hold. The high price of lithium-ion batteries, the best available option, is one of the key reasons there aren’t many electric bikes on the road today. However, PowerGenix says it has a good alternative, and has inked a partnership with a Chinese manufacturer to prove it.

PowerGenix makes a variation on nickel metal hydride (NiMH) batteries, which are often used in hybrid vehicles (which have a conventional engine to back up the batteries). The company has created a nickel zinc (NiZn) battery that has 35 percent higher power and energy density than NiMH, but is half the cost of a lithium-ion battery (which still has a third more energy than a NiZn battery), according to its CEO, Dan Squiller.

The batteries are also light, which makes them particularly suitable for small vehicles like motorcycles. The result is a mid-market bike or scooter that can travel far enough for commuting or errands without breaking the bank. Veloteq, the US subsidiary of Chinese brand Power Eagle, will make a scooter that will be initially marketed in Europe and the US based on PowerGenix’s NiZn chemistry.

Making the batteries is also easy, because NiZn manufacturing uses the same equipment that NiMH and NiCad (an older type that was used in the 90s). That means PowerGenix can quickly scale up its production if there’s high demand.

The first Veloteq product will be unveiled later this month, at the Las Vegas Interbike convention. PowerGenix is based in San Diego, Calif. We’ve previously covered the company, giving more details on its battery technology.