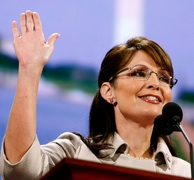 The nation and even a lot of people outside of the United States were all atwitter last night about vice presidential candidate Sarah Palin’s speech at the Republican National Convention — on Twitter.

In what it’s calling the “Palin Peak,” the micro messaging service has a post today outlining how much traffic spiked during her talk. The verdict? If you thought Google’s launch of its new browser Chrome was big, it has nothing on Palin.

That has to be good news for the service; it shows that while many of the so-called “early adopters” on Twitter were tech elites who are naturally going to talk about tech topics, Twitter is gaining more steam around other topics — like politics and natural disasters. (Interestingly, Twitter doesn’t compare Palin’s traffic versus the much-hyped speech Obama gave the week before.)

It’s also noteworthy that the mainstream media is helping Twitter move to mainstream adoption in a major way. C-SPAN has set up a web page dedicated to showing tweets (Twitter messages) about the political conventions, and updates are sometimes shared on the air. Meanwhile, CNN correspondent Rick Sanchez was using Twitter last week to give updates about Hurricane Gustav. He was also reading tweets live on the air.

The graph below shows hourly activity during a few days this week. 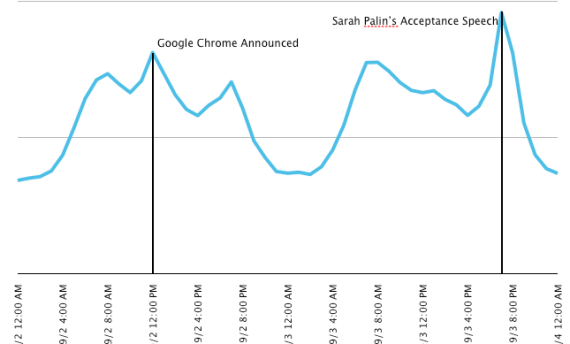 And yes, I ripped myself off on the title of this piece.