Groupsites, a white-label social network product somewhat similar to well-known competitor Ning, has relaunched. Like Ning, its allows users to create their own networks, but focuses more on collaboration and productivity than leisure and casual connections.

Groupsites gives you sites that feature a drag & drop modular experience (similar to products like Netvibes or Pageflakes, where you can move widgets around your screen: see screenshot below) and allows you to pull in information from external websites. Groupsites’ managers can embed videos, photos and widgets directly into their site as one of the draggable modules.

Users can also now export Groupsites modules or widgets — such as the shared calendar — into a blog, website, or another social network.

This is a competitive field. Aside from Ning, there are up to 75 other players by one count, and so Groupsites has its work cut out for it. Groupsite is focusing on offering a nice interface. It provides the standard set of tools to allow groups to communicate, share, and network, by integrating discussion boards, group blogging, member profiles, relationship sharing, and e-mail blast capability. Its focus on productivity becomes evident in its collaboration tools, including shared calendaring, file storage, and media sharing.

In some ways, Groupsites is to Ning what Facebook is to MySpace:

While Facebook was always thought to have a much cleaner interface than MySpace (Facebook’s old user interface featured drag & drop profiles), MySpace was known more for being able to customize style sheets and backgrounds with glitter and other assortments. Likewise, the difference between Groupsites and Ning is clear after using the software for a few minutes. 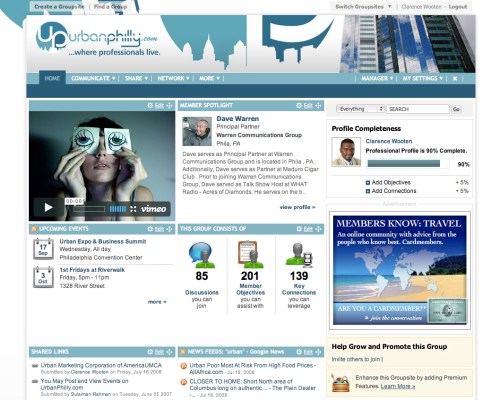 Groupsites is a product of Collective X, which was founded by serial entrepreneur Clarence Wooten. In the few years since the Columbia, MD startup got started, CollectiveX has made do on $1.25 million in seed investing. Its traction is fair; there are 17,000 groups actively using the platform, and the site has more than 100,000 registered users, says Wooten, who sold his previous startup, ImageCafe for $23 million to Verisign seven months after launch.

The business model is very similar to Ning — CollectiveX sells advertising against its free users’ accounts, and sells premium features a la carte: for payments of $9 per month admins can gain more control over group permissions, enhance network security with 128-bit SSL encryption, increase storage capacity to 3 gigabytes, statistics and domain mapping, custom branding, ad removal, and even replace ads with their own advertising.