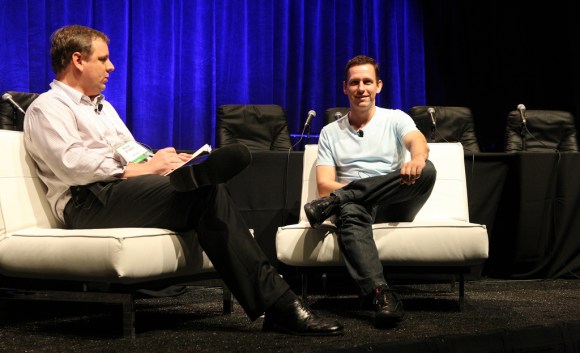 Peter Thiel is the legendary cofounder of PayPal, investor in Facebook and other numerous companies, and founder of top venture firm The Founders Fund. Michael Arrington of Techcrunch is interviewing him now. I’ll be constantly updating. Everything below is chronological order — and paraphrased.

Techcrunch: What about Ron Paul, now that he’s out?

Techcrunch: What about pruning hedges?

Thiel: That’s different from a massive hurricane. There’s a nice idea that the bloodshed is worth it — but that’s ridiculous.

Nobody was talking about the housing bubble even last year. Should have acted in ’03 or ’04.

Techcrunch: Are we in a tech bubble?

Thiel: We’re not in a tech bubble. Because we haven’t had any IPOs. All public tech companies are relatively cheap right now.

Techcrunch: About VCs. What about valuations? What about Slide’s half a billion dollar valuation?

Thiel: If you look at rate of growth, it’s cheap.

Techcrunch: What about models for venture capital?

Thiel: Will be much more collaborative, like what we’ve done at The Founders Fund… Are there quantitative methods of finding which startups will succeed? You’d need a computer that’s smarter than a human in every possible way. But, you could have some division of labor — could help raise questions, flag issues, or find good things. We’ve found there are certain kinds of quantitative metrics in startups that will determine if they succeed. One predictor: CEO pay level should be relatively low. Shows if the CEO is trying to collect check or is trying to make company better. North of $150k and you start to have issues.

Techcrunch: What are trends in tech that are starting to excite you?

Techcrunch: You were a great chess player – would you have ever guessed that machines could beat humans at it?

Thiel: People reinterpreted history. Before computers could beat humans at chess, people said chess took too much creativity. Now, chess comes across as a “party trick,” but not relevant. We’re taking this seriously. How many other domains can computers win? Our thesis is that there are more than people think.

Techcrunch: What about solutions to oil problems?

People last century used to think oil was going to run out. But it didn’t. As a result, people are more complacent today.

Audience member: What about your work with Singularity?

Thiel: Large parts of our society are geared towards innovation. Pension funds are set up to growing eight percent a year.

Only way that could happen would be with Singularity. If it doesn’t happen, we’re going to have a lot of problems.

Audience member: Seems like companies have had long, stealth gestation period. Where does that fit with open philosophy of today, that start without stealth mode?

Thiel: I don’t think of it as open versus stealth. I focus on what the company is doing that’s unique. Hopefully it’s so unique that you don’t need to be sneaky about it. Dangerous when it’s 100 people doing roughly the same thing. As a society, time horizon tend to be too short term. They think that if you can’t do something in six months or a year, it might not be worth doing at all. There are probably a lot of very great businesses that would need three or four years. I’m very open to ideas with a longer time horizon.

Techcrunch: Facebook. Can Zuckerberg and Sandberg take it to the next level?

Thiel: I think we have the right team in place. It has been incredibly innovative. I don’t think the rate has been any greater than any other company of this size.

Techcrunch: Even pre-IPO at super-hot startups?

Thiel: Zuckerberg is going to be CEO forever.