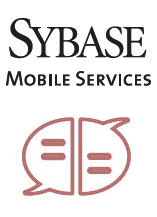 One reason sending text messages (SMS) has become so popular recently is because customers of different operators can send SMS messages to each other — irrespective of where they are in the world.

However, until now, that hasn’t been the case with multi-media messaging (MMS), a different protocol that lets you send files in more sophisticated formats than just test, including photos or imagery. If you’re a customer of Verizon, you can’t send an MMS message from your phone to a friend who is a subscriber to a carrier in China, for example.

Now Sybase 365 is helping to change that. Sybase, one of the largest providers of SMS to the world’s carriers, is moving to make to MMS messaging between hundreds of carriers interoperable too. It has offered this interoperability within the U.S. thus far, but not to customers outside of the U.S. Its acquisition of the Cable&Wireless hub in July has allowed this.

Some caveats though. Of the world’s total 850 operators, only about 400 of them support MMS at all. Of those, only 300 support offer some form of international MMS. Sprint, for example, doesn’t offer its customers international MMS. It could do so now efficiently, if it were to use Sybase’s international messaging hub service.

Not that Sybase is the only player offering this to carriers. Sybase’s reach is as strong as any, though, and especially dominant in its U.S. presence. Sybase’s move means international operators can obtain interoperability with US customers more easily. Other large global players competing with Sybase include Belgacom, Aicent and Syniverse, but each have regional or network biases. Sybase is only sixth worldwide, in terms of MMS traffic it carries, but that traffic is more than doubling each year, according to Bill Dudley, group director of product management at Sybase.

Notably, the increase in supply of MMS interoperability doesn’t mean carriers can play providers off of each other and lower prices. Indeed, if anything, prices are going up, according to Dudley. That’s because messaging prices are relatively low already, and much more important factors are other factors — including reach, reliability and other services such as protection against spm — are more important. MMX 365 also offers things like automatic scanning of all in-bound MMS messages for known mobile viruses.

Operators can choose to connect to MMX 365 via a secure IP connection or via GRX.

Routes between the USA operators and the rest of the world will be incrementally deployed in the coming months.