Our coverage of the CTIA continues. This is a Q&A with Jesse Goranson, Senior Vice President of Mobile Media, Nielsen (pictured). Nielsen is a leading source of data for the mobile industry. VentureBeat’s mobile expert Matthaus Krzykowski led the questioning. This is the second part of an extended series by Krzykowski on mobile advertising.

VentureBeat: Next to the discussion on “open networks” the other big debate at the CTIA is on mobile advertising. Is a boom in mobile advertisements really coming? There’s been skepticism in the past, with critics saying there’s a lot of hype.

Goranson: The answer appears to be a resounding yes. Marketers have a knack for finding audiences, wherever they roam. Our research shows that consumers have been increasingly exposed to mobile advertising over the past 12 months. In a recent study by Advertising Age, fifty-three percent of advertisers said they anticipate an increase in mobile ad spending, with only 9 percent expecting a decrease.

VentureBeat: Okay, so it’s coming. How big will the market be?

Goranson: With all its different formats, mobile advertising is increasingly difficult to talk about in a collective fashion. Mobile is actually a composite of many different advertising forms: For example, mobile video, with under 10 million active users in the US, is still in its nascent days as a marketing channel, while nearly 138 million subscribers use text messaging, and around 43 million mobile subscribers already use mobile internet—giving advertisers access to scalable audiences for marketing efforts throughout these content types. 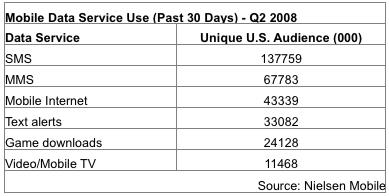 VentureBeat: I’ve heard estimates that the mobile display ad market is around $100 million. That doesn’t count search ads. It also doesn’t count SMS, and so on. Gartner currently estimates the entire global market to be worth up to 2.7B, growing up to 12B $ by 2012. Will this advertising be effective?

Goranson: Consider the Obama campaign’s excellent leverage of text message marketing, when he delivered last month the “need to know” information of Obama’s running mate via text message to 2.9 millions supporters. Will it have an impact in the presidential race? It remains to be seen whether that database of numbers will help the campaign between now and November. The other question is, are users actually noticing the ads on their phones? Earlier this year, we estimate that 77 million mobile users per quarter see some form of mobile advertising while using data service on their phones—up 81 percent over just two quarters prior. Users of the mobile internet were the most likely to have seen mobile advertisements (57 percent of mobile internet users recalled seeing some form of mobile ads), but users of email, social networks, mobile video, music and other media are first likely to start seeing ads this year. 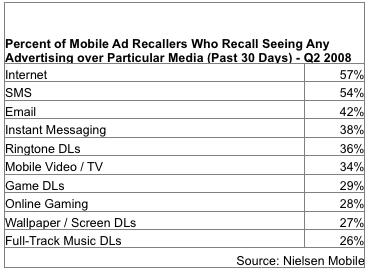 This uptick in exposure is the direct result of increasing agency and advertiser dedication toward mobile. In the past year, agencies have brought mobile out of the backroom, designating teams and financial resources to this medium, as they would to other media channels. Positioned to explore the possibilities, agencies have, in our opinion, started better exploiting mobile’s unique marketing functionality of time, place and interactivity.
VentureBeat: The Obama campaign is cited very often as as case study here at the CTIA as some companies hope that SMS will become more important in the US market. Mobile expert Tomi Ahonen calculated that the campaign got 2.1 million extra votes for Obama for a cost of $300,000 dollars and I heard this numbers of his already used twice in sales pitches. Next question: What are the barriers to more uptake of mobile advertising?

Goranson: There are still hurdles. For one, mobile media is late to arrive to a media and advertising economy that has developed greatly in the past three to five years in terms of reliably quantifying return on investment (ROI). Mobile, coming of age at a time when ROI calculations are expected of modern advertising, will have to quickly show how server logs, independent research and electronic measurement will jointly bring clarity to the results of mobile marketing. The second major hurdle to mobile advertising will be consumer receptivity. Receptivity is closely related to ad relevance, which will be increased by higher quality ad targeting. The communications laws generally prohibit carriers from using or disclosing for marketing purpose information about their customers’ use of the service except with express, opt-in consent ,so as we look for ways to leverage those unique capabilities of mobile, consumer profiling research is critical to helping advertisers determine where to place relevant advertising.

VentureBeat: Interesting. Admob’s Russell Buckley argued on VentureBeat recently that “mobile advertising is becoming increasingly accountable and measurable.” While you both agree on the trend towards more accountability, your data suggests the industry still has ways to go. Final question: Where do you think breakthroughs will happen in mobile technology to help mobile advertising along?

Goranson: Consider the marketing opportunities when a consumer uses mobile mapping functions, with physical location documented either technically through GPS or manually by entering a ZIP code. This possibilities for advertising presented by Google Android’s inclusion of Street View Google Maps seem endless. From an interactive standpoint, we expect to see an increase in mobile ads that incorporate click-to-call functionality, which allow consumers to see an advertisement and link directly into call mode to request more information, order the pizza or talk to an agent. Our research shows that one in ten mobile ad viewers have already used click-to-call to respond to a mobile ad, a functionality that will be even more important as local mobile advertising expands.

With audience and interest in place, the missing link for mobile advertising adoption has been the ability to invest intelligently in mobile media. Advertisers needed tools in place to allow them to make fact-based and measurable advertising decisions. Here, Nielsen and other firms have greatly accelerated the development of media research and advertising planning tools over the past year, to help agencies take a bolder step into mobile media. There are further advancements to be had, to be sure, but already a number of tools are in place that enable the market and allow advertisers to better track the ROI of their mobile ad buy.

Today, audience reach and demographic information is available for hundreds of channels across mobile video, internet, games and applications, and agencies can track the performance of hundreds of marketing shortcodes for fortune 100 brands and a presidential candidate. But audience measurement isn’t enough.