Big companies aren’t always that good at creating engaging online communities for their customers. LiveWorld hopes there’s a market in handling that task. And now it is releasing LiveBar, which is a way to overlay bare bones social networking functions on any web page within minutes.

LiveBar isn’t much to look at. It’s just a black bar that runs across the bottom of a web page. But it enables a company to put Web 2.0 features in the exact part of a web site where people would want to comment. A movie site can instantly become a fan site by adding LiveBar. Its features include conversation threads, “soap boxes” (or blogs), and “shorts,” or 140-character messages that resemble Twitter messages.

With these features, a previously static web page becomes more interactive, making the overall site stickier, meaning users will linger on it longer. That translates into a more attractive site for advertisers and more ad revenue. Users can click on different tabs on the translucent bar to read or leave their own messages. The LiveBar is fairly unobtrusive and doesn’t slow a site down, the company says. Customers can mix and match the social networking components as needed.

On a page that promotes “Entourage,” for instance, HBO could create a social network for the hit TV show with LiveBar where people can discuss the content of the page, said Peter Friedman, chief executive of LiveWorld in San Jose, Calif. He calls this “contextually relevant community,” meaning that users can leave comments exactly where they want to on a large media site. You can, for instance, create a social network for a particular episode of Entourage by putting LiveBar on the page that describes that episode. 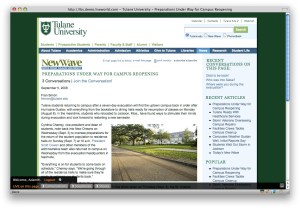 Because the LiveBar features are standardized, they’re easy to add to any site. It takes minutes to do. By comparison, getting companies to add customized Web 2.0 features to web sites can often take months. As such, LiveBar is a tool for retrofitting pages that were created in the days before Web 2.0. It’s a way for companies to play catch-up in the Web 2.0 game, where engaging consumers in a conversation is just as important as presenting information to them.

The goal of the tool is to increase traffic to a given web page and thereby increase advertising revenue. LiveWorld gets a set-up fee and license fee. The company has 70 employees and 200 moderators.

Tulane University and A&E’s Bio.com are the first clients but Friedman said others will be added soon. LiveBar is an addition to services that LiveWorld already offers, such as community moderation, the operation of online support sites, and applications hosting.

LiveWorld, which calls itself a social-media agency, already has a ton of well-known customers, including A&E Television Networks, The Campbell Soup Company, eBay, HBO, HSBC, Kraft Foods, LeapFrog, Neutrogena, MINI Cooper USA, TJX, and QVC. The Bio.com site will be launching this fall with LiveBar.

The company competes with Lithium Technologies, another company that outsources community support functions for big companies. Lithium recently raised a $12 million round.