The Internet Movie Database (IMDb) has long been a favorite site of mine. It’s a film buff’s dream: Find out who is in what movie, quotes, who directed what, what else they’ve directed, etc. Simply following links within it can be a time consuming experience. That said, it’s also been an experience that has been somewhat trapped in the 1990s. Sure, they added dynamic user ratings last year using AJAX (making it so you don’t have to go to different pages to vote on a film), but it’s hardly what some would call “web 2.0.” Today, it’s getting closer though.

The site has finally added meaningful video clips and updated the way pages are laid out to make video more of a showcase. This seemed like an obvious move for a site about movies, as paidContent points out, but up until now watching any sort of video on the site was rather tedious. This was especially surprising since Amazon, which has a huge collection of videos from its Video On Demand (formerly Unbox) service, bought IMDb a decade ago.

Starting today, there are over 6,000 feature-length films and full television episodes that you can watch for free right from the IMDb. Many of these are embeds from the NBC and Fox-backed online video site Hulu. For example, if you go to the IMDb page for Master and Commander: The Far Side of the World (a great movie), you will now see a big “Watch It” button right below the film’s main poster. Clicking on this takes you to a page on IMDb with the Hulu embedded player. 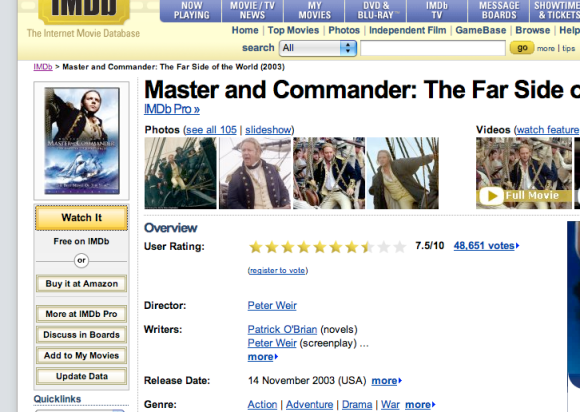 There is also a button just under Watch It to “Buy it at Amazon.” This allows you to buy the DVD or watch it through Amazon’s Video on Demand.

There is also a new video section for finding TV episodes, independent short films, new movies, classic movies and movie trailers. Videos not done through Hulu appear to be simply streaming from IMDb and are played through a bare-bones video player.

If IMDb is able to add enough feature films to its library, it could become an even more compelling visit.

On a side note, as I expected, The Dark Knight has fallen from the number one movie of all time on the IMDb’s Top 250 list. It is now still an impressive number 3.