Adroll, a company that seeks to help web site publishers band together so that they’re more attractive to advertisers, has just raised several million dollars in a first round of venture capital funding.

The San Francisco company, run by Jared Kopf (left below), plays in a very crowded industry. Every day, it seems, there’s a new ad network that emerges. With the economy slowing down, there are simply too many networks, and not enough ads to go around — and so expect continued consolidation, even while advertising continues to grow online over time.

Adroll, however, is hoping to serve the mass of sites that are too small to be served by large advertising agencies, but large enough when rolled up together — according to topic niche — to merit more attention. That’s why publishers will get more than the $2 or so CPM (cost per a thousand impressions) provided by most ad networks. Adroll joins groups like Federated Media, Glam and Adify, all of which seek to round up similar types of blogs or web sites. However, FM has focused on specific industries, starting with technology news and expanding to cover areas like automotive, business, green and parenting). And Glam has focused on women’s fashion and other women’s content. Adroll, meanwhile, focuses on any topic. For example, Adroll serves a community of alternative music sites, a group of mom bloggers, and a bunch of surfing sites, to name a few. Adroll launched publicly in April, serves 1,600 publishers and caters to 250 advertisers who run ads on the sites, according to Kopf.

Unlike Federated Media or Glam, Adroll doesn’t go out and try to sell ads for the blog co-ops that have signed up with it. Federated Media and Glam charge their publishers a pretty penny for doing that (about 40 percent of the revenue they bring in), but they do come back with high-paying ads, typically $10 CPM or higher. By automating its offering, Adroll will serve ads that typically pay publishers less than that, but much more than the $2 CPM typically paid by your average ad network. It does more work than Adify, which simply provides you an ad server, but not a lot of assistance to roll up with other blogs.

The quesiton is, how large is the opportunity, and how defensible is it, at a time when all these other ad opportunities are out there for publishers to try? Kopf says some sites are making $1,000 a month — which is much more than what you’d get from Google’s Adsense, so it appears there’s at least some real value for the participants.

The funding comes from Merus Capital, the fund started by Salman Ullah, formerly Google’s VP of corporate development, and Sean Dempsey, also formerly of Google’s corporate development group. Other investors include Thiel, Accel Partners, Mike Maples (backer of Digg Twitter), former AOL President Bob Pittman and the two brothers who were early investors in ad company Right Media. Kopf wouldn’t specify the amount, but said that it is between $2 million and $8 million. The round follows unspecified seed funding provided by Thiel. 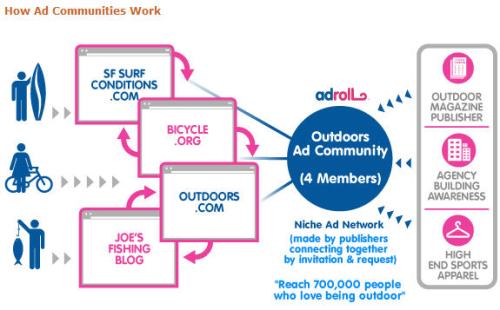