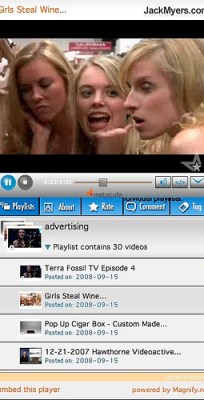 Magnify is the site that wants to be the one-stop-shop for all your web video needs. Not only does it allow you upload videos, but it allows you to make playlists including videos from other top sites including YouTube, Vimeo, Hulu and others. The problem was that the videos from other sites were separate from the video you uploaded to your own players on Magnify. Now the two sides are merging.

Magnify Multi-View Player (MVP) allows users to take the content they upload and merge it with their favorite videos from around the web. Playlists make the merging of these videos seamless and they can be placed on any other site. Magnify offers a new embeddable player that can be customized.

Alongside these new features, Magnify will also be opening their application programming interface (API) so users can take the data from their Magnify channels and put it on their own sites.

More options is always a good thing, and the fact that Magnify gives you a place to create a best-of web video of sorts is nice. But this MVP feature still doesn’t make Magnify YouTube. It lacks one key quality that YouTube excels in: An insane amount of users who watch an absurd amount of videos. But Magnify seems to be doing okay for itself, as it claims over 5 million videos being added to its channels each month.

Earlier this year, the site added professional tools for video creators as well as social networking elements for users. Numbers from Compete (which are far from perfect) show it growing at a pretty nice clip since then in terms of site visits.