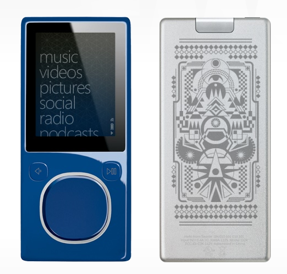 The Zune. You know it. You love it. You probably don’t have one. But if you do, Microsoft has some nice updates for it today.

A new software update brings with it access to Wi-Fi at over 9,800 McDonald’s fast food restaurants around the U.S. This is being done in conjunction with Internet provider Wayport and will be free for all Zune owners. With it, Zune users can download and stream music from the Zune Marketplace.

It’s somewhat interesting that whereas the Zune is now paired with McDonald’s, rival Apple has its devices tied into Starbucks. McDonald’s and Starbucks are currently locked in a battle of their own over the breakfast crowd. Each has crossed into one another’s turf with McDonald’s putting more of an emphasis on premium coffee (that is cheaper than Starbucks), while Starbucks is doing breakfast sandwiches. Now with Zune versus iPod it’s clearly a battle to the death.

Microsoft isn’t stopping with its McDonald’s partnership. It also has Zunes in new colors and designs — and also has a new music recommendation system. If this sounds familiar it’s probably because Apple made the exact same announcements at its “Let’s Rock” event last week. The new colors will be found on the Zune 16 players (those with 16 gigabytes of storage). 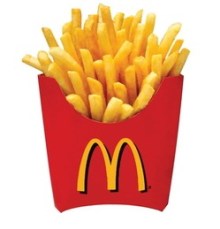 Still, the Zune does have some things that set it apart from the iPod. While there are fewer songs in the Zune marketplace than there are on iTunes, over 80 percent of them are DRM-free, versus a significantly lower percentage on iTunes — much to my dismay.

The Zune Marketplace also offers a subscription model on top of its pay-per-track model. This means that for one flat monthly fee, Zune owners have access to all of the music in the store. Rumors have been circulating that iTunes is looking into a subscription model as well, but thus far nothing has come of that.

The Zune also has a built-in FM radio, which lets you tag songs, marking them for download.

Will Apple counter in this digital music player war by making its players connect to the Internet for free at Hardee’s? We shall see.