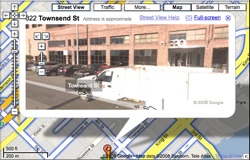 The most significant addition is probably the incorporation of Google’s “street view” feature, which allows you to see street-level pictures of an address. On one level, this just seems to provide more opportunities for silly moments where you’re looking at the real street, and also looking at a photo of the street on your mobile phone — or maybe that’s just me. But it’s also useful; as with other versions of street view, it can help users visualize particularly complicated or confusing parts of the directions.

My favorite new feature is the addition of walking directions, which is relatively new to the web version of Google Maps. As a San Franciscan, I use the mapping feature on my phone much more often when I’m walking than when I’m driving. It’s a pain when I get directions that are much more complicated than necessary because of one-way streets and other factors that only affect drivers. Google has also added full business reviews, as well as improvements to speed and location accuracy.

These features are available for the BlackBerry and other Java-enabled phones. I hope to see some similar improvements to the iPhone’s Maps application (which is powered by Google Maps) ASAP.

Here’s a video demo of the new features.