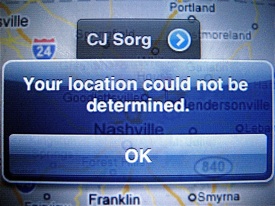 With a global positioning system (GPS) chip now in the iPhone 3G, location services are becoming important to many mobile application developers. Each day, we’re seeing new iPhone apps launch which, if they’re not centered around location, rely heavily on it for core functions. But because Apple will not allow any applications to run in the background, it is hampering much of what location-based services (LBS) can do, as Brady Forrest rightly argued on O’Reilly Radar a couple days ago. Manual location updates are fine, but real-time updates regardless of if you’re using your phone or not, are the future.

This sentiment is shared by Pelago chief executive and co-founder Jeff Holden. His company makes the location-based app, Whrrl. An app which venture capital firm Kleiner Perkins saw enough promise in to make Pelago the first recipient of money from the iFund, the firm’s $100 million fund to spur iPhone application development.

Whrrl is a nice application, but it could be much more, and Holden knows it. The key idea behind the app is to “drive down the friction with which you can share experiences,” Holden told me when I met with him at last week’s CTIA conference in San Francisco, Calif. The key to that is getting people to use the app.

Certainly, promotions such as the one Whrrl is currently doing with the hit HBO television show Entourage, in which fictional characters from the show send location and status updates, help. But usage may skyrocket if a user could just have a device in their pocket that signals to friends where they are or who they’re with.

To many people this sounds scary, and naturally it would have to be something that is opt-in and could easily be turned off for private moments. But many, including Forrest in his piece, realize the power of being able to know when a friend is nearby. Or passively updating your location which can likewise tell your friends where you are. 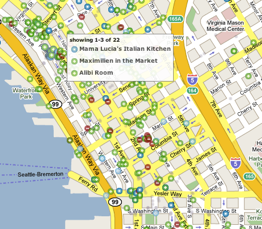 Obviously, other location-based applications such as Loopt and Where would benefit from continual location updates as well. Unfortunately, that’s simply going to be hard to do unless Apple changes its plans for the iPhone. While the upcoming Push Notification System will be somewhat useful for these location-centric apps, it will not allow the apps to run in the background. Instead, it sort of mimics background messaging functionality through its own servers. Because of that, it doesn’t seem like it will be possible to continually update something like your location throughout the day.

Instead, as Holden explained, another Whrrl user could ping you to let you know they’ve checked in somewhere even if you don’t have the Whrrl app open. That ping would direct you to open the app to update your own status. That’s basically a Facebook “poke” or a Twitter “nudge” — cute, but not really all that powerful.

Holden sounded much more optimistic about the other platforms that Whrrl is running on or will soon run on. Phones such as RIM’s BlackBerry running on networks such as Verizon’s should allow for LBS background features eventually. Likewise, Google’s upcoming Android platform will have background location features. Applications like Life360 depend on it.

When these are released and if they become as popular as Holden thinks they will, expect the pressure to be on Apple to follow suit.

That may end up being the catalyst that makes Apple open its iPhone platform a bit more to allow apps to run in the background. Remember, initially Apple wasn’t going to allow third-party developers to make native apps — all development was to be done through the Safari browser. Apple relented on that. And it might as well for background-running apps.

The future of location services may depend on it.