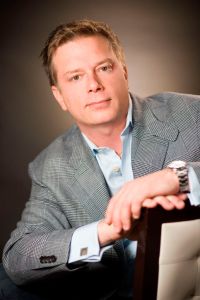 Virtual worlds are in fashion now, drawing investments of $184 million in 23 worlds in the first quarter. But the original player here is Linden Lab, which launched Second Life in 2002. Mark Kingdon came aboard as chief executive of Linden Lab in May, replacing longtime CEO and founder Philip Rosedale, who remains chairman. More than 15.1 million registered users have tried out the virtual world. Kingdon was formerly the CEO of online creative/marketing agency Organic. Today, Linden Lab announced Direct SLurl, a way to get into Second Life from the web. We chatted with Kingdon about the state of Second Life and the virtual world industry.

VentureBeat: What have you been up to since taking over as CEO?

MK: I started in May. I’ve crossed my third month. It’s been incredible. So much is happening with Second Life. My focus has been getting to know the people and the company and working with our teams to map our strategic direction for the company. We’re wrapping that exercise up. It started before I joined. We have a clear sense of direction. We are making progress with our platform from a stability perspective. Our viewers are getting better with each release. We are continuing to expand the user base and the number of simultaneous users. We hit a new concurrency high.

VB: You replaced longtime CEO Philip Rosedale. And one of Linden Labs’ early employees, Cory Ondrejka, also left. How do you view the change in leadership? 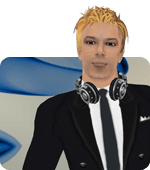 MK: It’s been very smooth and comfortable. We have a very engaged group of employees. What I see is a continuation of the great work that Philip and Cory started. I come from a user-experience and usability background and from a larger company. We want to focus on making it usable so we can keep growing the user base.

VB: What are some of the decisions you’ve made?

MK: My decisions have more to do with priority and focus. We are focused on making the experience more accessible. And we are working to make it stable as it scales to greater numbers. We hired Frank Ambrose as senior vice president of global technology. He was at AOL and MCI before he joined us and he is focused on scalability and stability. 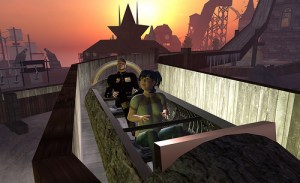 MK: Registered users is above 15 million. The more important number is the simultaneous users. That is now more than 68,000. The diversity of users continues to grow. Companies are actively developing their presences in Second Life, more around collaboration and product development. You might say it’s a renaissance for businesses in Second Life. The first wave was well documented as a brand-building exercise. Now the second wave is more focused on collaboration and learning. On the consumer side, the thing that is most interesting is we have a lot of international adoption. I spend a lot of time visiting the “help islands” where new residents (as Second Life members are called) “rez in” for the first time. The diversity is staggering, with Polish-speaking or other users joining.

VB: How many registered users are there now?

MK: We focus more on the simultaneous users and usage hours. The last stats we posted showed user hours grew 8.5 percent to 380 million in the second quarter. The number of regions owned by residents increased 44.2 percent over the first quarter to 1.5 billion square meters. 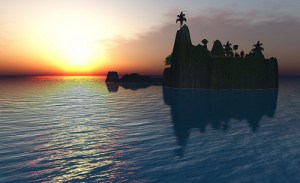 VB: The registered user number isn’t as meaningful because people try it out and don’t return if they don’t like it.

MK: Yes, we don’t really have a tourist visa for people who want to check it out. We’re thinking about making it more accessible for people who don’t have the time to invest in it.

MK: We are thinking about the best way to do it. One thing we did this summer was simplify the registration process, taking it from seven pages to one page. That really boosted the completion rate starting in early July. That’s paying off now in concurrent users, we believe. We’re looking at a lot of ways to simplify the consumer proposition. We are making strides. Our latest viewer (the screen interface the member uses to view and navigate through the world) is simpler and easier to use. We’ll do more redesign over the next 12 months to make it more accessible for new users. 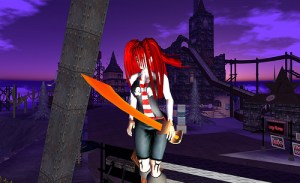 VB: What’s your view of Second Life’s history, or milestones along the way?

MK: It’s been a very compelling proposition for some time. The excitement comes when someone spends time in the world and learns how Second Life works. There is an “aha” moment. They see the power of the experience. The media has helped to raise the visibility of Second Life. There is no question when the media covers cool things inside the world that we see a spike in registrations. There is good awareness in the market today. The first wave was virtual-world pioneers coming in. The second wave was when businesses saw a brand-building opportunity. The third wave is now where consumers find the experiences that are most relevant to them, like live music, or participating in groups with common interest. Also, we are seeing businesses re-enter Second Life with a focus on collaboration, learning and product development. We’ve been through substantial expansion as a platform. You can see it in the diversity of the user base.

VB: Has the company found the right business model?

MK: The company is profitable and growing. That’s an enviable place to be in an emerging medium. We have a strong business model, built on the strength of the in-world economy. There are almost $1 million US dollars changing hands in user-to-user transactions every day. That makes the Linden Dollar strong. In August, we served our 8 billionth minute of in-world voice, a year after it was introduced. Looking forward to the next 12 months, we are on a run rate of 22 billion minutes. 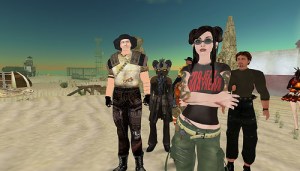 VB: Do you monetize that?

MK: No. It is a free service today. We see opportunities to expand the service and add dimensions we can charge for. It has had wide adoption and I use it a few hours a day myself. We are spread out and so we do our company meetings in the world. Our revenue comes from the sale of land. That’s server space with services around it. There are other revenue sources in search and classified advertising. Those are relatively small compared to the sale of land.

VB: In Asia, there are a lot of companies with the free-to-play model supported by the sale of virtual goods. Do you view that as serious competition?

MK: I don’t. The sale of digital goods is something that has enormous room for expansion. You can see the in-world economy continues to grow at a nice clip and it will for quite some time. Our model is based on all user-generated content and there are more than 2 billion pieces of user-generated content that users have spent hundreds of millions of dollars creating. The in-world transactions are all about buying and selling those digital goods. It’s a huge market opportunity for us. 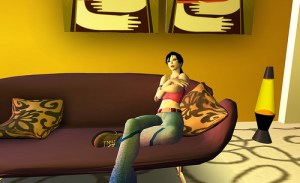 VB: There was a hype cycle for Second Life. It went through a bashing cycle, too.

MK: That always happens. Now the coverage is much more balanced. It focuses on the interesting things people are doing in Second Life. We still garner a huge amount of coverage.

VB: There is also a hype cycle for virtual worlds. We see dozens of new virtual worlds getting funding or launching every quarter.

MK: About 12 or 18 months ago, there was an enormous amount of VC investment in virtual worlds. A lot of those companies are coming into the market now and I see that as enormous validation of this space. We have seen no slowdown as the result of competitors.

VB: Where is this heading?

MK: You are seeing validation of the virtual world space. You see new entrants coming in, targeted at specific market segments. You will see Second Life continue as the dominant platform because of its size and wide user base. And because of its growing and vibrant in-world economy.

VB: I see a lot of activity in the virtual room category, like Habbo, IMVU, and now Lively by Google. 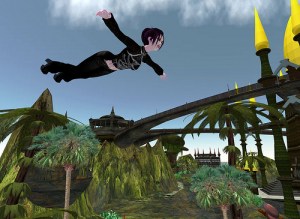 MK: They are really in the graphic chat category. Many of those are social platforms. That is part of the Second Life experience, but we are much bigger and broader than that. Look at how educators are using it for virtual learning and businesses are using it for collaboration and consumers are using it for health and wellness.

VB: One of the virtual room companies said they get the sweet spot of customizing a room but not needing to pay big server costs because they don’t have to maintain the position of this room in a larger world.

MK: The question is whether that is compelling to the consumer. Are they looking for more? It’s hard to say. What we do know is people are very attracted to the in-world economy that Second Life offers, like live music events. They show off the power of the medium to give you a feel for a real-life concert.

VB: How did you view Google’s entry into virtual worlds with Lively by Google?

MK: When Google enters your market, it makes you look twice. We say, wow, look who’s here. We were pleased it validated our market. The world realizes that this is real and has great potential. There is no impact on our business.

VB: Have you answered the question of what you do in a world that is not a game?

MK: Yes. Have we answered it perfectly? No. Do users answer that for themselves? Absolutely. They find meaningful content, people to enjoy it with, and then they become loyal. We could do a better job of showcasing the content for people. 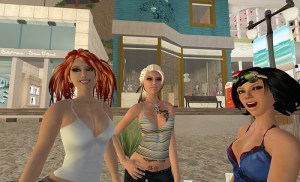 MK: There are lots of successful businesses in Second Life. People can make a lot of money selling virtual goods and services. It becomes very meaningful for people. It explains why people are so committed.

VB: Wagner James Au’s book, “The Making of Second Life,” has a section where he tried to figure out how much of the world related to sex. He said it is not all about that. Have you figured that out?

MK: Second Life is broad. It has live music, education, health and wellness, business, arts, and cultural events. It’s as diverse as the real world. It’s hard to characterize it as dominated by any one thing. It’s a lot more about being social. About shopping, buying and expressing oneself. Last weekend, we had a huge “hair fair.” People want to buy hair for their avatars. 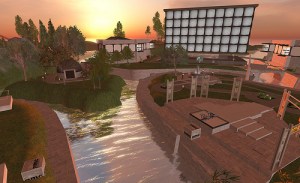 VB: How far will realism in avatars, as we’ve seen in new worlds like Nurien, go in the future?

MK: Over time, our diversity will continue. You’ll see some avatars that are both realistic and fantastic. The one thing that is evident is its breadth, depth and diversity. We will continue to build content creation tools that let residents create dynamic content. That’s a singular focus of ours.

VB: Where will the Metaverse (as author Neal Stephenson called an avatar-driven 3-D world in his book Snow Crash) wind up?

MK: If we look out more than a few years, I can see that most people who are connected digitally will have a presence in a virtual world. It’s compelling. Travel is becoming more and more expensive. We can visit places virtually because of the cost. It will be a huge market.

VB: Does the recession have any impact on the virtual world industry?

MK: We’re not seeing it. It might affect the startup world.