Hubdub runs a news prediction game site where users can place bets with virtual money on how certain news stories will turn out. Based on current betting, for instance, people believe that Monday’s Gallup presidential poll will favor Barack Obama.

Now the Scottish company is announcing that Reuters will partner with it to integrate Reuters’ news reports into Hubdub’s prediction site. Reuters will also put Hubdub widgets on its own site, helping Hubdub get access to wider distribution. The Thomson Reuters news agency generates questions for users to trade on based on the latest breaking news, with topics ranging from the current credit crunch to the outcome of the U.S. presidential election. There are tools and resources aimed at building a Reuters community within the site. These include a “friends” application, commenting, Reuters market widgets, and top Reuters stories of the day.

Like many prediction markets, it relies on the principles behind “The Wisdom of Crowds,” the book by James Surowiecki that showed that crowd behavior is often right in the long run. Hubdub contends that the predictions made on its site are more accurate because they involve so-called “crowdsourcing.” The crowd bets with HubDub dollars and wins more dollars if the bets are right. As prediction markets are increasingly common, Hubdub has competition from combination news and prediction sites such as The Industry Standard, Intrade Prediction Markets, and News Futures. 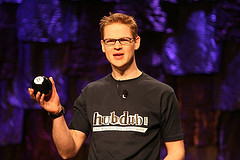 Here are some samples: Which of these banks will be the next victim of the credit crisis? Will AIG still be a publicly traded company on Oct. 1? And who will be leading in the Reuters Zogby poll after all three upcoming presidential debates?

Hubdub is based in Edinburgh, Scotland, and is headed by Nigel Eccles, chief executive. About 80 percent of its users are in the U.S. It has six employees and a half-dozen part-timers who serve as category editors. The company raised an angel round of $200,000 in November from a group of Scottish technology investors: Kevin Dorren, Ian Ritchie and Andrew Allen. It formally launched its site in January at the DEMO conference.