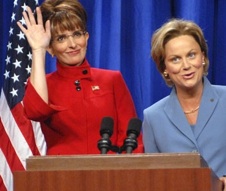 When NBC made the decision to pull its television content from Apple’s iTunes store late last year, a lot of users were upset. Ten days ago, Apple announced an agreement with NBC to bring the content back, and since then it’s already sold 1 million shows on the service, according to numbers from Apple. That’s pretty amazing, considering that most of the new fall shows have yet to premier.

But iTunes is hardly the only Internet property seeing success with NBC’s content. CNBC.com and NBC.com also saw record traffic recently, according to The Hollywood Reporter. CNBC can thank the United States’ economic meltdown — its site surged past 1 million unique viewers, and people apparently spent 18 more minutes on the site on average than they did on rival sites like Yahoo Finance, WSJ.com and Bloomberg.

Meanwhile, NBC.com can thank vice presidential candidate Sarah Palin. Specifically, they can thank Tina Fey’s impersonation of Palin on Saturday Night Live this week. It was NBC.com’s most watched viral video — ever.

Yes, it beat such classics as “Lazy Sunday” and “Dick in a Box.” And, more impressively, it also beat the viewership numbers the video had on YouTube, The Hollywood Reporter says. (NBC does make efforts to keep its content off of YouTube.)

The iTunes and NBC.com numbers are especially impressive when you consider that NBC also has its popular free video streaming site Hulu. The fact that people are willing to pay a million times in 10 days on iTunes to get something that they probably watch for free says something — that the content is good.