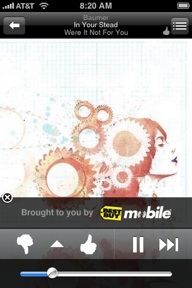 A service like Pandora is able to exist because of advertisements. The free online music discovery service has made headlines over the past year because the government decided to up the royalty rates online music streaming services have to pay when a song is played. Without advertising, the service would be finished. So it should be no surprise that the service’s brilliant iPhone application added advertising today.

The ads themselves are unobtrusive. They are simple overlays that reside right above the main navigation within the app (see picture at left). What’s better is that if a user decides they want to click on one, instead of it shutting down the Pandora app and thus stopping the music you are listening to, it opens a web browser within the app to display what is being advertised.

Currently, there are two companies that have signed on for campaigns: Best Buy and Beck’s beer, as the blog MyTestBox notes. But the company is anticipating all of its ad inventory to be snapped up in a hurry, Pandora founder Tim Westergren told me today.

Part of the reason is because of the application’s growth. “We had no idea the audience on it would grow so fast,” Westergren says. He adds that there are now well over one million iPhone Pandora listeners.

Pandora is also excited about advertising on a mobile platform like the iPhone because the ads can be so targeted. Demographic targeting, for example, lets Pandora know not to serve a Beck’s beer ad to a 13-year-old. Westergren also noted that as location becomes more prevalent in devices like the iPhone, local ads could open up whole new revenue possibilities.

Because it has so much experience servicing ads on its web-based service, Pandora isn’t using one of the third-party iPhone ad platforms like Medialets, AdMob or PinchMedia, and is instead handling all the ad sales itself.

The iPhone version of Pandora also makes some money off affiliate fees for pushing song buyers to the iTunes store. The revenue that generates is not core to Pandora’s business strategy though and pales in comparison to the amount it makes through advertising — though it has been steadily rising, Westergren says.

This is all good news for Pandora fans, as the service is obviously figuring out how to monetize the mobile versions of its site. Still, “even monetized to the hilt, we still need a better answer on the royalty front,” Westergren says. Let’s hope someone answers that soon.