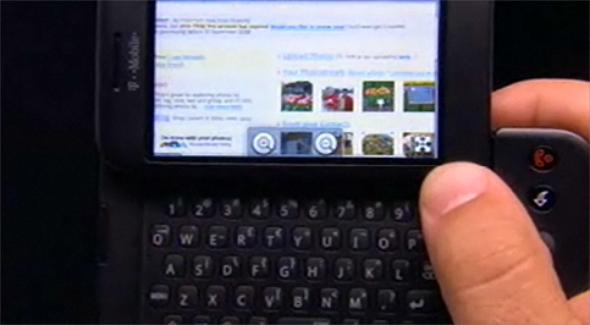 The first phone to use the Android operating system is here. And the rumors were mostly true. It’s officially called G1 (not “Dream”), it’s made by HTC, and it will be offered by T-Mobile. It will be available to T-Mobile’s 30 million US subscribers on October 22nd — there’s been a slight delay from the previous date we heard of, October 17. Of T-Mobile’s 100 million subscribers in Europe, Britain will get the phone in “early November,” T-Mobile says, while the rest of the continent will get it in the first quarter of next year.

The third-party app store will allow developers to reach phone users in new ways. “There’s no third party that will say, you can’t do that,” one Google developer told the crowd via a pre-canned video. As with many other moments during the presentation, the comment is a dig at Apple. Specifically, in this case, a dig at Apple’s sometimes Byzantine restrictions on which apps are allowed into its App Store.

Among other developers, Amazon is a pre-launch partner. It will offer its own mobile music store, as we reported yesterday.

Google’s apps, are, of course, built into the interface. The phone will include a customized Gmail application and a mobile internet browser based on the same technology (Webkit) as Google’s new Chrome browser. The address book will use Google’s Gtalk to allow instant message communication between friends, allowing you to see things like your friends’ IM statuses. Applications will also be able to communicate directly with each other. For example, you can jump directly from your address book to the map application — an interface move that has not been possible on mobile phones up to this point.

Another example is the copy and paste function — you can copy a picture in Picasa and paste it into your IM app, then send it to somebody. Functions like this will likely be a source of innovation in mobile apps.

It also appears that a new version of the Android software development kit is about to be released. Changes to the SDK will shape which potential functionalities are supported for third-party applications. For example, SDK 0.9 has disabled the bluetooth API — a decision we already criticized. It is expected that this functionality will be enabled in either this SDK release or a later one.

T-Mobile will start its marketing campaign for the G1 in October, and it will be the largest campaign for a device in T-Mobile’s history. T-Mobile and Google have a “unique” relationship that they’re not discussing further.