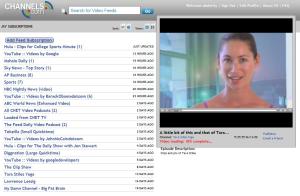 In spite of the economic doom and gloom right now coming from Wall Street, some unbridled optimism remains in corners of Silicon Valley.

I’m talking about the cheerfulness of Sean Doherty, the chairman of Channels.com, which is launching its web site a second time today, even amid crushing competition. Channels.com lets you subscribe to all sorts of serialized Internet videos (see our story 18 months ago). Doherty calls it his “DVR for web videos.” When I asked Doherty how many employees he had, he said, “Zero.”

That’s right. He managed to get a product out that has been produced almost entirely by contractors.

The Palo Alto, Calif.-based company was founded in January 2005 and it raised a couple of million bucks from angels to develop a curated site that linked to web videos. But the editorial staff was expensive and the product flopped when it was released 18 months ago. Doherty gave up on the staff. Moreover, a host of competitors popped up, from MeeVee to Joost and BitTorrent, all with their variations on the model.

But Doherty managed to raise another million dollars in October so that he could try again. This time, Doherty decided the way to go was to automate the process. He decided to create an RSS reader — not for subscribing to blogs, but for video. He calls it a “video feed aggregator.” Now you don’t have to search for videos. Channels.com’s automatic servers will crawl the web and do it for you.

It’s easy and it’s free. You log in with a username and password. Then you can browse through 11,000 different video feeds that Doherty’s team has collected. You can see when the most recent episode was posted and how many videos are available. With a single click, you can subscribe. This comes in handy because it will pull in any new episodes of a show that you want to follow. You can create a personal channel and you can search for videos using keyword tags. The search function will find whatever is typed into the XML feed file for the videos. That allows Doherty to get by without an editorial team.

He still has some big competition. Another company called ffwd also makes it easy to create personal video channels that you can share with friends and otherwise use to discover new videos. Aside from the other rivals mentioned above, there’s also Invision TV, Veoh, MeFeedia, and Odeo.

But there’s also a monster out there. Namely, YouTube. Sure, he knows that YouTube has the lion’s share of the market. But he is betting that YouTube will not own all consumer-generated video on the Internet. Already, sites such as ESPN.com and Hulu.com have a bunch of web videos. And they finally have RSS feeds that you can click upon, cut, and then paste into the Channels.com viewer. RSS feeds for video didn’t exist just a couple of years ago. Now they’re plentiful. That was a bet that Doherty got right.

The site is live now and has been in a beta for about four weeks. It’s impressive that Doherty, the former chief operating officer of the ill-fated @Home broadband network of the late 1990s, has stuck with this idea. He took a leave from his investment firm, Odyssey Management Capital of Palo Alto, Calif., which he ran with a few partners after the @Home collapse.

Yesterday, he was one of the attendees at the Streaming Media West conference, where the halls were mostly empty. That’s what you have to love about Silicon Valley. The sheer, irrepressible enthusiasm of its entrepreneurs, even when things look grim.