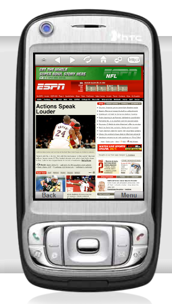 I’ve been spoiled by the iPhone. When I was using a Windows Mobile device today browsing the web with the mobile version of Internet Explorer, I was just about ready to throw the phone out the window. The experience was horrible. Then I opened the new version of Skyfire, version 0.8, which is being released today. Boy, what a difference a browser makes.

Skyfire is a third-party web browser made for Windows Mobile and more recently, Symbian devices. It offers a full web experience on smart phones using technologies such as Ajax (asynchronous JavaScript and XML).

Not only does Skyfire bring a desktop-like experience to Windows Mobile and Symbian devices, in some ways it’s superior to the web experience offered by the iPhone. For example, today I was able to watch full Flash video right from within the browser. The iPhone still doesn’t support Flash, so any site that wants their videos to play on the device must have a version ready that will also load in the iPhone’s QuickTime player (YouTube does this for example).

Even cooler, with Skyfire I was able to watch content from the popular Fox and NBC-backed online video streaming site Hulu. I also was able to watch NFL games streaming over the Internet — had any been live at the time, I could have watched them live.

Fairly intensive websites such as Facebook, also loaded quickly on Skyfire. Switching tabs on the social networks’ new interface was smooth and quick, and I could even stream media within one of the site’s applications (iLIke), just as I would on a regular computer-based web browser.

While Skyfire blows mobile Internet Explorer out of the water, its real competition is the mobile version of the Opera browser, Opera Mini. Today also brought a new entry in the form of a version of Google’s Chrome web browser built for T-Mobile’s new G1 phone running the Android platform. Given Android’s promise of openness, I wouldn’t be surprised to see a version of the Skyfire browser running on Android in the future.

Skyfire raised a $13 million second round of funding back in May. That round was led by Lightspeed Venture Partners. Prior to that, it had raised a $4.8 million round.