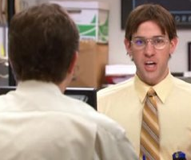 The reason is obvious: The U.S. government is clearly wary of the deal that would see the number one and number two online advertisers team up in any way. So Google has dedicated 17 pages, conveniently available online through Google Docs, to why the government — and any other naysayers are wrong.

The first few slides are rather funny. They are like online tutorials for where Google would put their ads on Yahoo’s search results pages. It’s not clear if Google thinks the U.S. government are children or just idiots.

I also like the “What the deal is NOT” slide — though I would have preferred it in more of a Wayne’s World style. For example, “This deal is a merger. NOT!”

Google also dedicates the right side column to quotes from analysts and industry insiders who think the deal is a good one. And the site highlights The New York Times article entitled Why the Google-Yahoo Ad Deal is Nothing to Fear.

The no-spin zone, this is not. See the full slides show embedded below.

The title and image of this post are inspired by the truly great clip embedded below from NBC’s hit show The Office in which Jim gives Dwight a lesson in “facts.”