The distinctions between hardcore games and casual games (the committed enthusiasts versus the broader market fans) are melting away. That’s evident in the strategy of Graham Hopper, president of Disney Interactive Studios. The company puts 70 percent of its investment into titles that support major Disney licenses, but the investment is growing so much that Disney is pouring a lot of money into original titles for hardcore gamers such as “Pure,” a critically-praised off-road ATV racing game that Disney just launched. In a fairly short time, Disney will be tripling the amount of money that it invests in video games. As Disney builds its gamer cred, it will be interesting to see if it can snare hardcore gamers even as it pursues mainstream consumers and girls.

VB: You started your expansion a few years ago and you’ve kept on buying game development companies.

GH: Yes, it’s an outgrowth of our continued investment in this space. This year, we’re spending $175 million to $200 million in development. Last year it was $130 million and the year before it was between $90 million and $100 million. You can expect to see our output continue to increase. We’ve also said we plan to raise that number to $350 million a year in five to seven years’ time. We aren’t done yet. There are a lot of exciting projects we’ll be announcing in the next 12 months. 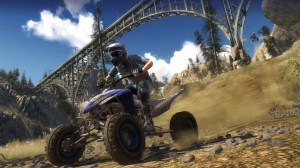 VB: So “Pure” is going to get you some real cred among hardcore gamers?

GH: I think so. It’s a really fun game. The team at Black Rock Studios was so excited to have an opportunity. We asked them what really turns them on. They had this idea of taking an ATV game into the wilderness. They created this massive environment with vertigo-inducing jumps. The game took shape and moved in a wonderful direction. It’s more like a trick-racing game than the simulation games they had done before. It’s accessible and fun. It lets people with different levels of competence get something out of it.

VB: What are your impressions of the industry?

GH: The industry is in a state where the hardware is [available]. Big software titles have been launched. We’ve been able to show our broadest line-up we have offered to consumers. Everything from younger kids to core gamers. Some is aimed at girls. Some at guys. Some for both. We have a good mix of new intellectual property and existing Disney content. We’ve got a strong line-up of music-related games that taps our music properties. We are feeling comfortable. We are trying to show things that really deliver for us. It’s good to have video games recognized for their contributions on a global basis. Our industry [should promote] enlightened views of video games. We are a major employer. Some people in our industry fear that we’re becoming too mainstream. To me, it’s the last thing you should fear. The fact that more people are playing games, and there is more diversity, is only a good thing. No one will stop playing hardcore games. This broadening is in everyone’s interests. 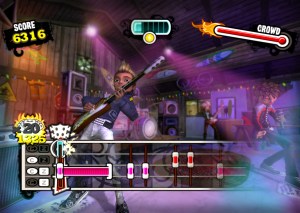 VB: The music genre itself looks like it is going to keep on gaining market share in the game business.

GH: People are looking at what’s in the top ten. The unit price is so much higher for games like Guitar Hero, where the purchase price includes the toy guitar, and that’s one reason their share of the dollars is high. It looks disproportionately large. Our upcoming Ultimate Band game will sell for a regular retail price and doesn’t require the added cost of an accessory.

VB: You shouldn’t have to buy a new peripheral every time you buy a new music game?

GH: I don’t think so. How much space do you have in your home for new peripherals? I’ve got guitars falling out of storage closets. There could be a limit on what people want to buy unless the games keep getting cooler. It’s the nature of the modern consumer. We are surrounded by choice. Our job is to give them games they didn’t know they wanted.

VB: It looks like you’re targeting music for the rest of us? The other music titles are adding a lot of features now and they’re getting harder to play.

GH: Guitar Hero and Rock Band are great games. But we’re going after a different segment and we think it’s complementary. You can enjoy those games as well as our new game. We don’t think we’re direct competitors. 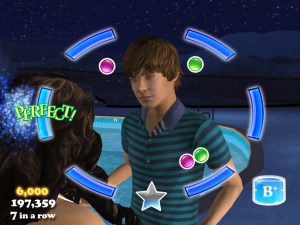 VB: How do you make licensed properties into outstanding games?

GH: One thing we’re trying to stress is innovation and not taking the license for granted. You may sell a certain number of games because you have the Disney property to go with it. But you’ll sell a whole lot more if you have a great game. Innovation is not always easy. It’s something our team is taking very seriously. You’ll see titles on Club Penguin where we have unique features such as playing a game and earning coins in the stand-alone game. Then you can upload those coins over Wi-Fi and spend them online. It’s a unique and innovative feature that appeals to anyone who enjoys Club Penguin.

VB: Do you have a ways to go in terms of being recognized as an innovator in games?

GH: I think we’re succeeding already. I never will be satisfied. We have innovation coming in different ways. On Bolt, the story is about a dog with superpowers. In the movie, when Bolt leaves the set, he still thinks he has superpowers. But he has to learn how to deal with not having the powers in real life. We could have done a game that told that story of the movie. But our team at Avalanche and we created a game where Bolt really did have superpowers. That’s about five minutes of the movie. It’s far more fun. In other cases, we’ve announced “Toy Story 3.” That’s another game from Avalanche. We showed it to Pixar’s John Lasseter and he loved it. That will be releasing in 2010 and it has innovative features in it. It’s going to change perceptions of what Disney licensed games are.

VB: Have you noticed any shift in the industry because Electronic Arts has moved to original content?

GH: That’s a tough question. There are more people interested in the broader market than just us now. They want to address the broad market and that will be good for everyone. Movie studios like us are targeting those markets and games for girls. Anything that increases the size of the market is good. We and Nintendo have been doing a lot of heavy lifting ourselves. More people are coming to the party.

GH: We have different strategies. Our strategy is to do fewer games and do them well. We sell more units of each. I’d rather do higher quality titles to get a better return on investment. It doesn’t mean we aren’t open to new ideas in the girls space. We do have some that aren’t licensed titles. Historically, Disney has been doing licensed titles for girls and that is not going away. Disney Faeries Tinkerbell is a great game for the Nintendo DS. We’re trying to make them as good as we can. There are about 40 hours of game play in that one. I don’t know who else has invested so much in a game for girls. There is a chance to expand it. 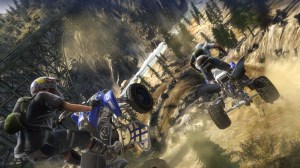 VB: Are there more opportunities for games that appeal to both boys and girls, like the Sims from EA, or for just girls?

GH: We are doing games that are purposely for girls. Others are fun experiences for both, like Disney Sing It, our karaoke franchise. The “High School Musical” version of that was a tremendous success, either at parties or [for individual players]. Teens of both genders are playing them. There is a large number of girls who like hardcore games. It’s dangerous when you put people into buckets. They make their own choices and our job is to make a broad product offering.

VB: Club Penguin’s big purchase price of $700 million has inspired a big copycat market. Disney paid $700 million for it and a lot of other startups are chasing that market now.

GH: There is no doubt there is a lot of investment flying into virtual worlds now. It’s not as easy as it looks. As part of our new organizational structure, the leaders of Club Penguin will have more influence on our virtual world efforts.

VB: Is Warren Spector’s Junction Point Studios work being done in your group?

GH: It is. We aren’t talking about it. But when you see it, you’ll like it.
VB: Is he important in that he is a well known hardcore game developer? If you succeed with him, you can bring more hardcore developers into the fold?

GH: It’s not about having someone well known. It’s about what they can bring. The title that Warren is working on is something we wanted to get made for a long time. We had to find somebody that could really understand the promise of it and take it to the next level. That is exactly what he’s doing. Someone of his level of talent is not just about having a name. They’re taking his team’s experience and applying it to a new subject.