Facebook is well aware of its potentially influential position when it comes to the young adult demographic. Perhaps that’s why the social network has launched a voter registration application today, with Rock the Vote and powered by Creedo Mobile. The application allows Facebook members to register to vote online, without even having to leave Facebook. If you’ve come across any of the Rock the Vote registration widgets on the web and even on the Xbox gaming console, you may have already noticed the ongoing effort to gain registered voters by enabling the registration process to be initiated online. 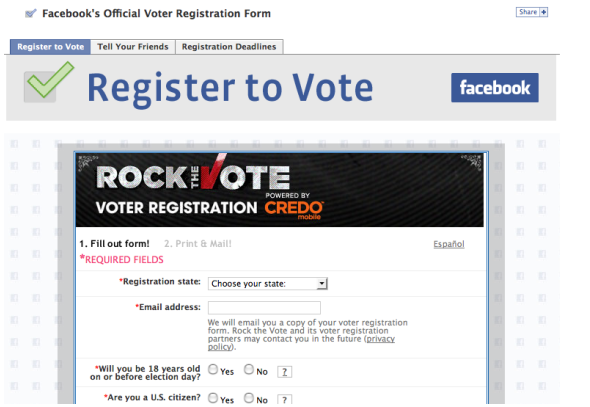 This simplifies the overall process and helps remove many of the excuses we all give for failing to register to vote. The new Facebook app makes things even simpler, allowing you to register by filling in the online form and encouraging you to invite your friends to do the same. After completing the online form, you’ll receive a copy of your registration information via email. While the application itself has no affiliation with political candidates or their parties, there is always the concern that the way in which the application is being promoted through online social networks makes it more inclined to attract a certain demographic.

In Facebook’s case, there are more users that have joined support groups for Obama than McCain. As InsideFacebook notes, the tables may be turning as Republican Vice Presidential nominee Sarah Palin has more supporters than Obama’s VP candidate Joe Biden. The narrowing of the gap in terms of online presence, however, began before Palin was brought on board. What really matters, however, is the number of users that will register to vote as a result of the application’s initiatives. So far, the Facebook Voter Registration app has signed up 3,485 people since launching earlier today.