For a long time, web “filters” have been working on delivering the right information to the right person. But usually, web sites are lousy at making personalized recommendations.

Sociocast Networks will try to solve that problem. It is launching today a new platform for delivering personalized content so that users can see content that is filtered for them (according sites they’ve visited in the past, their stated preferences, their friends and their tastes, etc.) and advertisers can target ads more accurately.

It joins a long list of other players who have entered this personalized recommendation area — including companies like Aggregate Knowledge, Baynote and RichRelevance — some of which have already fallen by the wayside already because it hasn’t paid off.

Sociocast is based on the idea that things like “ratings” systems don’t really work because of the maxim that actions are louder than words. People may say what they prefer, but it’s better to capture what they actually do, says Ari Goldberg, co-founder and chief channel officer at Sociocast Networks. “Behavioral models are better at predicting user behavior.”

It’s not clear whether Sociocast has technology that breaks new ground. Baynote, for example, boasts that it tracks 24 different variables to offer up content to individuals based on their tastes. What Sociocast appears to be doing, though, is matching that content interest with targeted advertising too.

The first place to use the technology is StyleCaster, a Sociocast fashion channel, or a fashion web site for women that will be similar in some respects to Glam.com.

The New York-based company hopes to outdo customizable portals such as MyYahoo, iGoogle, or Glam by using better technology that figures out a consumer’s tastes and then feeds the right content to the person. It combines artificial intelligence with the measurement and prediction of consumer behavior, said Albert Azout, founder and chief executive of Sociocast (pictured left, below; Goldberg right). 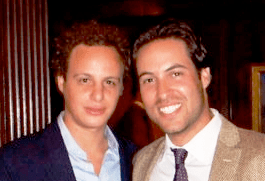 The company purports to understand user behavior and tastes by pooling together all sorts of information about your tastes, but also adapting as your tastes change. It tries to figure out what general neighborhood, so to speak, surrounds you and then pitches targeted ads to you. The hope is that rather than relying on users to reveal themselves based on what they search for, Sociocast will be able to predict what you want and send that to you.

This is a lot more easily said than done. It sounds a lot like the old “push” technology of the 1990s that really didn’t work. Companies such as Netflix have struggled for years to come up with more accurate movie recommendations for customers. It’s also hard to do this without tagging everything so that it can be easily search and identified. That’s one of the banes of semantic search engines.

If you’re wondering exactly what this company does, I’m with you. I haven’t had a chance to see how good its “next-generation personalization technology” really works.

But it’s worth some attention. The company is funded by Dan Gilbert, chairman of Quicken Loans and owner of the Cleveland Cavaliers basketball team. The company will start looking for a second round of funding in the fourth quarter. Gilbert serves as chairman of Sociocast Networks.

Goldberg is formerly a business development officer for NBA star Lebron James. Azout is formerly a quantitative modeling programmer at Lehman Brothers and he also started his own ad agency, Short Labs, which merged with Seed Gives Life. They have been working on the overall technology for about four years and raised $1 million in angel money. In 2007, they started the sister company, StyleCaster, and have raised $4 million in angel funding for that.