The year is 2019. Respiratory Distress Syndrome, or REDS, has appeared in Stockholm, the first city outside of the tropics to see a case. The disease is known to overwhelm local health resources everywhere it goes, and news of health insurance companies going belly up has become routine. Word is spreading that in the absence of effective governmental responses, ad hoc militias have been forming to forcibly quarantine infected populations around the globe.

On its own, REDS sounds like a major disaster, but it is not the kind of thing that could put an end to the world. But in Superstruct, a large-scale online game put on by the Institute for the Future, REDS is merely one of five independent “superthreats” coming to a head in 2019. The others involve 250 million climate change refugees, the steady breakdown of the global food supply, increasingly brazen attacks on the world’s cyber infrastructure and the rising international tensions surrounding the world’s failure to agree on standards for renewable energy.

Taken together, these five threats pose a catastrophic risk to the human species. The game forecasts that humans will be wiped out by 2042. The point of Superstruct, which anyone can begin playing on October 6, is to work together with fellow players and find brilliant ways to avert this fate.

The Institute for the Future: Predicting the future for the last 40 years

The Institute for the Future (IFTF), founded in 1968, is a non-profit think tank that has sustained itself primarily by collecting annual fees from governments, nongovernmental organizations (NGOs) and large corporations, who pay to get access to the Institute’s 10-year forecasts. It also does consulting projects. If you’ve ever seen one of Gartner’s Hype Cycle graphs, which chart predicted adoption patterns of various technologies over time, you have a sense for what technology forecasting looks like. The IFTF’s forecasts are kind of like this, but from a “macro” perspective. They take a deeper look at how technologies will integrate into people’s lives and affect society at large. 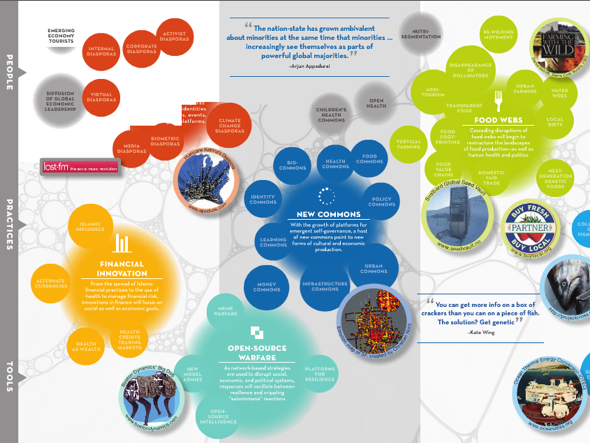 Throughout its entire existence, the IFTF has relied on its own researchers to generate the reports. But, Executive Director, Marina Gorbis, says, the social technologies of Web 2.0 — tools like Facebook, wikis, Twitter and YouTube — give the IFTF a chance to turn for the first time to the wisdom of the crowds. In an inspired twist, the Institute decided to do this by creating a platform for elaborate alternate reality games (ARGs) and bringing in a woman named Jane McGonigal to design it.

Alternate Reality Games (ARGs) create scenarios that tie together the online and real worlds. Instead of sitting in front of a screen for most of the time, ARG players get their orders online and then go out into their cities to both follow and create the story.  Jane McGonigal is one of the concept’s pioneers. Perhaps the most well-known project she worked on was I Love Bees, an ARG commissioned by Microsoft to promote the release of Halo 2.

In I Love Bees, a fictional military spaceship crashed to Earth and released an artificial intelligence that proceeded to take over a bee enthusiast site called ilovebees.com. Players who went to the hacked site were given clues by the AI that sent them out into the real world to do things like find specific pay phones and be there when the game masters called. (They made 50,000 pay phones ring at the same time, each with a separate message for the game which fans had to reconstruct into a six-hour broadcast). Thousands played the game. Hundreds of thousands watched its progress online. Those players who stuck it out to the end were rewarded with a special edition of Halo 2 and a chance to play the game in movie theaters before it was released to the rest of the world.

The ilovebees phenomenon, which itself followed the 2001 alternate reality game “The Beast” for Steven Spielberg’s A.I. movie, helped entrench ARGs as part of the gaming landscape. Microsoft sponsored a couple more for the launch of the Xbox 360 and the launch of Windows Vista. Marketers began to view ARGs as cool ways to reach consumers who weren’t watching TV. But Mind Candy, a British developer, found a business problem. While the ARGs created lots of publicity and many passive observers, the actual number of people who took the trouble to play the games was relatively small. The company shifted out of ARGs into kids online games as a result. Hence, ARGs are great for garnering attention, but not necessarily dollars.

Unlike I Love Bees, the Institute for the Future’s Superstruct game is not just creative marketing. It is also a research tool. The hope is that by staging a rich gaming environment and using Facebook, Twitter, YouTube and its own custom-made Web 2.0 tools, the IFTF can both draw attention to its mission and get thousands of people to give it some excellent ideas. The institute, in other words, is crowdsourcing the future.

The prelude to Superstruct launched last week with five videos, each representing a superthreat roiling the world of 2019. The videos take the form of a news report. “Quarantine” outlines the outbreak of REDS described above. In another video, “Power Struggle,” the world’s great powers are still clashing over alternative energy standards. With the move away from fossil fuels, traditionally oil-producing nations are failing. An international crisis mounts when the Chinese government stymies Daimler-Tesla’s plans to build electric vehicle plants throughout East Asia. The plants, it seems, would have lowered automobile emissions by 10 percent over 10 years. They would also threaten China’s investments in ethanol fuel. “How,” the video asks, “can we act together to hold nations responsible for their waste?”

There is also “Outlaw Planet,” which highlights the reverberations of a cyber infrastructure under siege, “Ravenous,” which looks at the fallout from soaring food staple prices and “Generation Exile,” which presents us with 250 million climate refugees, including senior American citizens who had retired to the now-uninhabitable Gulf Coast.

While the Institute for the Future remains tight-lipped about what will happen when Superstruct goes live next week, it has revealed some cool details. For example, Tim Kring, creator of TV’s Heroes, will be a honorary game master, as will sci-fi novelist Bruce Sterling and Wikipedia founder Jimmy Wales. Even some institute clients, like the Center for Disease Control, will somehow be involved. Meanwhile, paid community managers are already setting the stage with blogs and Twitter posts written from the perspective of 2019.

Gorbis says that the scenarios created for Superstruct are not knee-jerk reactions but careful, internally consistent projections and that the dangers they represent are entirely real. The threats outlined in Superstruct are insidious — the kind that start about now and unravel over the next ten years. Given current trends in economics, energy, demographics, climate change and cyber warfare, all of them seem plausible enough to send slight chills down the spine.

The word “superstruct” is a verb that means building new structures on top of existing ones. Throughout history, superstructing is one thing humans have done quite well. The other thing we do with virtuosic flair is destroy the structures we’ve built. For most of history, if one society destroyed another or combusted, there were “backup copy” civilizations that went mostly untouched in other regions of the globe. Now, no corner of the planet is far from another. The Institute for the Future created Superstruct because it suspects that without cooperation on a worldwide scale, the crises of the medium-term future could collectively obliterate everything our species has achieved.

The Superstruct game will push players not only to ask “what if?” but to try to determine “what now?”

Perhaps we should all get involved.