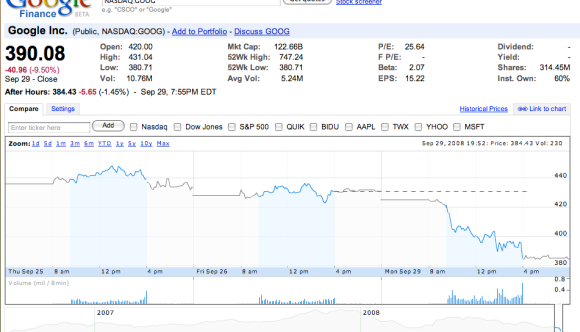 If you look at Google Finance, Google’s stock information site, you may notice something odd: Its numbers are off — as far as I can tell, nearly all of them! This is clearly a problem on a day when the majority of the country is looking for information about stock prices after one of the biggest collapses in the history of the stock market.

The chart for GOOG (Google’s stock ticker designation) looks right, but the actual number that is highlighted as the closing price is wrong. The after-hours price appears to be right, but because of the screwed up closing number, it looks to be falling even more in after-hours trading, when it’s actually rising.

Looking at Apple, which lost almost 18 percent off its stock price today, the numbers are closer, but still off. Other stocks like eBay and Microsoft are also skewed. In fact, I’m having a hard time finding one that is correct.

These errors could mean a lot for investors looking for deals tomorrow, or seeing how badly they were hurt today. We’ve emailed Google to let them know about the issue.

Yes, the product is still in “beta,” but this is ridiculous. $1.2 trillion dollars was lost today, and Google Finance would have you believe it was significantly less.

Update: It looks like the numbers have finally been corrected as of 3 AM PST. With nearly 12 hours of wrong data and no word back yet from Google, this is still quite distressing. Others, including former Googler Chris Sacca share this concern in the FriendFeed comments.