Hey, did you hear that? That was the sound of Google stockholders bursting into tears of relief. Google stocks appeared to fall off a cliff during the final few minutes of trading today (Silicon Alley Insider has a minute-by-minute breakdown), plummeting from more than $400 per share to around $200. Luckily, it turns out Nasdaq is declaring a “do-over,” canceling all trades above $425.28 or below $400.53.

Given yesterday’s stock market carnage, during which Google hit a new one-year low, some observers might be excused for thinking that a Google-centric apocalypse had arrived. But no — Nasdaq blamed the drop on “erroneous orders” that were “triggered by orders routed from another exchange.” So it has reset Google’s closing price at $400.52, up more than 5 percent from the day’s open.

The news follows yesterday’s Google-related stock gaffe, during which Google Finance’s data was incorrect for more than 12 hours. You can see the last few hours of the Yahoo Finance chart for Google’s stock below, reflecting a relatively steady price … then, Armageddon. 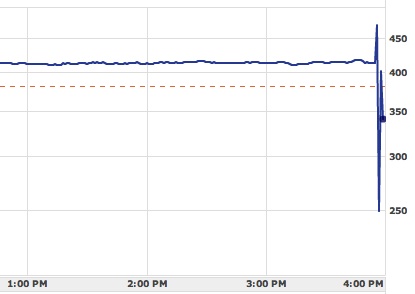